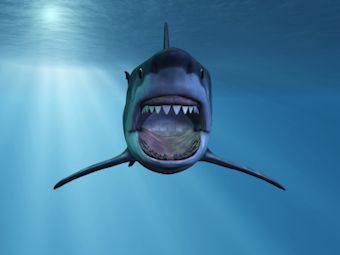 A dachshund felt threatened by an inflatable shark pool toy.  So, what did he do?  Well he certainly didn’t run.  Instead he went into attack mode and attempted to pull the toy into his kennel.  It was no easy task, but after a short fight, the shark was pulled into the dog’s castle and the fight was over.

There are many scriptures that talk about perseverance.  One of the most well known  is James 1:2-4 that tells us these moments should be considered pure joy because when we are tested, we become mature and complete.  This brave dachshund was certainly on the right track.  In fact, I think this doggy is ready for a trip to the beach.  Watch out sharks!

Joel M. Bauer is a 45-year-old U.S. Army Veteran from Dunn, NC, which is just outside of Raleigh. After being honorably discharged from the U.S. Army, he attended school at Taylor University, a Christian liberal arts school, in Fort Wayne, IN, where he received his BS in social work and psychology. He has worked in such places as a homeless shelter, a community based treatment center for severe mental illnesses, a school for troubled students, and other social service agencies. His current endeavor is to build The Bottom Line website into a site that inspires both Christians and non-Christians alike, and brings glory to God.
Previous What’s the Matter With Kids These Days?
Next Hidden Secrets Free a Man From Death