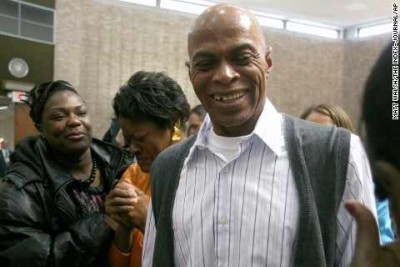 Edward lee Elmore, imprisoned for over twenty-five years on charges of rape and murder, has been released due to the dedication of his lawyers Diana Holt and John Blume who successfully revealed evidence that proved Elmore’s innocence.

Elmore was charged with three accounts of death row for the 1982 rape and murder of 75-year old Dorothy Edwards of Greenwood, South Carolina.   His attorney, Diane Holt, who began her investigations in 1993, “was surprised that a convicted killer on death row could be ‘so docile and innocent.’” Holt became determined to find an entrance into the truth and she was relentless in her search.  “If I throw in the towel, a client dies. If I stop working, they stop breathing,” Holt said. “Sometimes, I am the first person who ever stuck by them or treated them with respect.”

is an author and editor for The Bottom Line Ministries as well as a member of Faith Writers. Currently she teaches high school language arts. She is a mom to four amazing blessings and enjoys every moment life has to offer. Renee has a fervor and drive to learn, she loves to read and spend time with her family, and is involved with her local church ministries. Humbled by God’s gift of words, she has a passion to write what the Holy Spirit has placed in her heart. She hopes to publish her in-progress book someday, but in the meantime, is honored to be placed as part of the TBL writing family and is holding on to the ride wherever God is leading. Renee and her family reside in their country home in Holland, Iowa.
Previous Shark Attacked
Next My Wings will Protect you