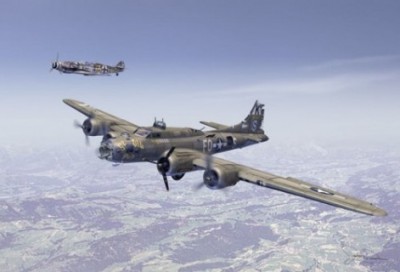 The Enemy, My Friend

It was 1943.  A young, twenty-something and inexperienced American fighter pilot and his equally inexperienced crew, lifted off for their first wartime mission – to destroy a German aircraft factory.  The American B-17 bomber, lovingly dubbed “Ye Old Pub”, had four engines, eleven machine guns, and heavy amour plating.  Although rugged and able, vulnerable areas remained and were typically secured by other planes flying in strategic formations.  If any B-17 ever got separated from the others, it would be as obvious as a sitting duck.

As the American bombers approached Bergman, Germany, eight German fighters met them with anti-aircraft rounds.  One round exploded right in front of Ye Old Pub destroying one engine and damaging another.  The flailing bomber couldn’t keep up with the squadron with only two good engines.  Alone, they sustained further serious damage to the aircraft and additional airmen casualties from another attack by fifteen German fighters.  The bomber spiraled quickly downward.  Miraculously, Brown, wounded and bleeding and lacking oxygen, somehow managed to pull the plane back up to 1,000 feet.  Having to fly over a German airfield at this altitude, he was noticed right away.

Franz Stigler, WW II Ace fighter pilot, lifted off the ground within seconds intending to finish off the enemy.  As he came into closer view of the bomber he remembers thinking, “I never saw anything flying so shot up”.  When he saw the dying gunner in the tail, he, being a man of high honor, knew he couldn’t shoot down that plane – enemy or not.  Moving into view of Ye Old Pub’s pilot, Stigler tried motioning for Brown to land in Germany, surrender, and thereby save what was left of the men and the plane.  Brown, shocked and bewildered, didn’t understand.  He kept flying towards England.  Stigler gave Brown a protective escort, flying within 20 feet of the bomber, until it was clear Brown intended to make it to England.  Stigler then saluted Brown and returned to his base.

Brown successfully landed back in England. His adventure and fame were short lived since the air force commanded him to keep the incident totally confidential fearing other airmen would let down their guard if they heard.  Stigler also kept his involvement confidential since sharing the event would have brought on a sure court martial or even a death sentence for abetting the enemy.

At a speaking engagement in 1986, retired Colonel Brown finally had a chance to tell of a “memorable WW II mission”.  As he shared the story of the German pilot that mercifully spared his enemy’s life (at his own great risk in doing so), Brown knew he had to try to connect with this extraordinary man.

In 1990, Brown’s search finally proved fruitful.  He was able to connect with Franz Stigler who had moved to Canada sometime after the war and had learned English.  Between 1990 and 2008, the men had many phone conversations and face to face meetings.  Brown speaks of their meeting, “It was like meeting a family member”.  The men remained close friends until 2008 – the year each died “within several months of each other.” (Proverbs 3:5-6)

There are times when the plans of God supersede the natural, resulting in a most unexpected blessing.  (1 Corinthians 2:9)

When has God moved in an unlikely way, on your behalf, in a relationship or situation that seemed out of place?  Will you allow Him to do so in a present situation?

I just love walking outdoors - day or night. I identify most with the creative side of God and am energized by His artistry all around this world. He amazes me every time I turn around! Yeah, God and thank you, Jesus.
Previous The Racy Reality Show,”Sex Box,” Is Cancelled… at Last
Next The Deceptive Nature of the New Age Movement