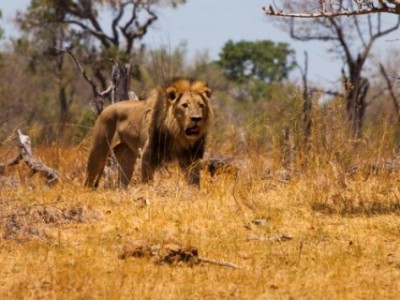 Thou Shalt Not Kill… Does God Forbid Hunting?

Matthew 5:21 The Voice (VOICE)  21) As you know, long ago God instructed Moses to tell His people, “Do not murder;[a] those who murder will be judged and punished.” 22 But here is the even harder truth: anyone who is angry with his brother will be judged for his anger. Anyone who taunts his friend, speaks contemptuously toward him, or calls him “Loser” or “Fool” or “Scum,” will have to answer to the high court. And anyone who calls his brother a fool may find himself in the fires of hell.

Clearly, one can see that Jesus is not speaking about hunting as he leads the listeners to take a deeper look into their own hearts. Hunters do not hate the animals. Those who oppose big game hunting do so because they feel it is wrong to kill for sport. These are personal opinions which they are both entitled to hold.

While on vacation recently, I had the opportunity to see the large collection of big game trophies of someone I know. The trophy animals are beautiful creatures with the exception of that ugly hyena (which truly is an ugly animal). Animal lovers bristle at the thought of the ‘poor, innocent animals’ roaming their own territory, defenseless against those evil hunters. I am neither a fanatic animal lover nor a hunter. I must admit; however, I did enjoy seeing my friend’s collection and hearing about his experiences on the hunts.

One small animal I had never seen before and made me a bit uncomfortable. It looked like it was too young to hunt. But I (like those outraged by the Texas cheerleader/hunter) did not know the facts. I learned that the ‘small’ animal was actually full grown. The truth about big game hunting, as explained by the hunters, benefits the areas where they are held. The 2008 Namibia Communal Area Conservancies report explains the best practices in sustainable hunting.

Genesis 1:26-27  (HSCB)  26) Then God said, “Let Us make man in Our image, according to Our likeness. They will rule the fish of the sea, the birds of the sky, the livestock, all the earth,and the creatures that crawl on the earth.”
27) So God created man in His own image;
He created him in the image of God;He created them male and female.

Agree or disagree, we currently have laws that permit a woman to end the life of her own unborn child – for any reason or no reason. To some, this right is considered a ‘sacred.’ To others it is legalized murder. Some who oppose this destruction of human life have bombed abortion clinics and have threatened the lives of abortion doctors. They are held accountable and prosecuted because we are a nation of laws.

Africa and other countries have laws that permit big game hunting. It is not, however, only for sport. These lawful hunts help to control the wildlife population and provide food for the community. They contribute to the local economy. It’s not all about getting a trophy. Some animal rights activists who oppose these hunts have threatened the lives of these hunters.

Undoubtedly, there are poachers who kill big game with no regard for the law. But why are those who participate in lawful hunts – those who contribute to an otherwise impoverished area of the world, hated to the point of death threats?

Each of us has a ‘cause’ of our own that inspires passion within us. We live in a fallen world. Without passionate people dedicated to a cause, the quality of life would not improve, injustices would not be resolved. When these passions are not controlled, they can become destructive. Passions, when held under the authority of Jesus Christ can be used for good.

Ephesians 4:32) And be kind and compassionate to one another,
forgiving one another, just as God also forgave you in Christ. (HSCB)

Melinda is currently the worship leader at her small church in rural America. Married for 23 years, she and her husband Larry have one son. She is the Director of Mailing in the print/mailing industry by day and freelance author by night. Her desire to write is a passion borne from tragedy. God used it to take her faith to a much deeper level. Melinda is a freelance writer and member of FaithWriters. She joined the TBL team in March 2014. Believing we are citizens of a greater ‘kingdom,’ her articles for The Bottom Line examine governmental responsibility, citizen involvement and current political topics. With the great wisdom contained in scripture as her guide, she looks at today’s political environment from a Biblical perspective. She prays her words will prompt the reader to view citizenship - and every aspect of their life, through the eyes of faith. Col 3:17 To read more of Melinda’s writings on her faith, hope, and life visit her blog Still Living Still Loving or her page at Faithwriters.com. You can also follow her on Twitter @MKZbk.
@@MKBzk
Previous New Shoes Phase
Next Searching For Meaning