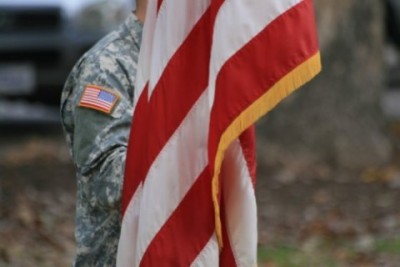 As a soldier, he had served our country well and was now flying back home.  He was accompanied by his family and an escort, seated comfortably in coach,  while our soldier traveled comfortably in the cargo hold.  You see, he had given all he had, literally, for his country and its people…you and me.

Shortly after the plane departed, the lead flight attendant identified the soldier’s father, mother, wife and  two year old daughter traveling with him.  The flight attendant informed the pilot, with a quiver in her voice, that the family was heartbroken not having been able to see, before departing, the container holding their loved one.  They wondered if there was anything at all she could do that might make it possible for them to see their son, husband, and father being transported to the connecting plane on the last leg of this excruciating journey homeward.

Normal airborne communique operates similarly to e-mail-type messages.  In this instance, the pilot bypassed proper protocol and connected directly with the flight dispatcher by secondary radio.  He explained the situation, what the family wanted, and was assured that the dispatcher understood the unique situation on his plane.  After waiting until almost time to start their descent, at which time he would be incredibly busy, the pilot sent a text message requesting an update.  The actual reply follows:

“Captain, sorry it has taken so long to get back to you. There is policy on this now, and I had to check on a few things. Upon your arrival a dedicated escort team will meet the aircraft. The team will escort the family to the ramp and [plane-side].   A van will be used to load the remains with a secondary van for the family.

Captain, most of us here in flight control are veterans. Please pass our condolences on to the family. Thanks”

The pilot printed the message and sent it back to the family.  Upon landing, he taxied his jet toward the ramp area and was informed that other traffic in that area was being held for him to pass unhindered.  He stopped just short of the gate to announce to the passengers:  “Ladies and gentleman, this is your Captain speaking: I have stopped short of our gate to make a special announcement. We have a passenger on board who deserves our honor and respect. His Name is Private XXXXXX, a soldier who recently lost his life. Private XXXXXX is under your feet in the cargo hold. Escorting him today is Army Sergeant XXXXXXX. Also, on board are his father, mother, wife, and daughter. Your entire flight crew is asking for all passengers to remain in their seats to allow the family to exit the aircraft first. Thank you.”

Not a soul moved.  As the family made their way down the aisle to the door, one passenger slowly started to clap.  Soon the whole plane was clapping and offering sincere condolences.

Make sure to thank a soldier.  They are worthy of honor. (Romans 13:7)

I just love walking outdoors - day or night. I identify most with the creative side of God and am energized by His artistry all around this world. He amazes me every time I turn around! Yeah, God and thank you, Jesus.
Previous Peeling Back The Pain
Next How to Stay Stress-Free During the Holidays