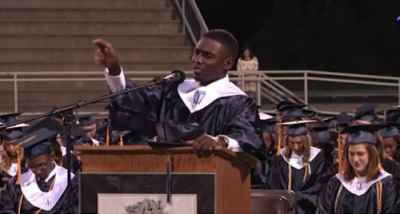 A Prayer for Divine Healing at a High School Graduation

It began as a typical graduation ceremony at Clay-Chalkville High School in Clay, Alabama. There were the usual speeches and the presentation of diplomas. Then things changed dramatically! Someone yelled, “Medic.” A medical emergency ensued.

At the urging of the school librarian, one of the seniors, Christian Crawford, went to the podium. He very boldly began to pray, asking that the individual be healed in the name of Jesus. He said, “…We know that you can make the way…you are a God who is a healer, the fixer Jesus.” The crowd responded with hearty applause.

This young man didn’t care what anyone thought. He spontaneously prayed a prayer for healing in the name of Jesus in front of 1,000 people at a public school graduation. Even though one could argue as to the appropriateness of this, the positive response of a large segment of those in attendance shows they were supportive of his bold action. He spoke with the power and eloquence of a person way beyond his age. It was a graduation that none will forget. As far as the person with the emergency is concerned, everything is fine.

Scripture says in II Corinthians 3:12, “Having, therefore, such a hope, we use great boldness in our speech.” That, Christian Crawford, did. He also took advantage of the moment to “come boldly unto the throne of grace, that we may obtain mercy, and find grace to help in time of need”(Hebrews 4:16). This verse doesn’t say to do it if everyone agrees with it, or if it is appropriate at a given moment.

This high school senior demonstrated the kind of bold faith exhibited in public in the Book of Acts. The disciples of Jesus did things in such a powerful way that it got people’s attention focused on the mighty works of God who is alive and able to heal, able to make a way, and who is “a fixer.” People came up to him after the ceremony and told him that he gave them new hope for this generation.

Indeed, Christian, is an example of many teens who are taking a stand for their faith in Jesus Christ in our public schools. I Timothy 4:12 is a verse for all teens to heed. “Let no one look down on your youthfulness, but rather in speech, conduct, love, faith, and purity, show yourself an example of those who believe.” In fact, his action made such an impression it got the attention of state politicians. He was invited to give the prayer at the opening session of the Alabama House of Representatives on June 3.

What would happen in our culture if more people of all ages had a bold faith like this high school senior?

Book of Acts Christian Crawford Clay Alabama Clay-Chalkville High School come boldly before God's throne of grace having spiritual convictions heartwarming stories for teens Hebrews 4:16 high school graduation ceremony hope for this generation I Timothy 4:12 II Corinthians 3:12 medical emergency not caring what others think prayer of divine healing praying in the name of Jesus at a public school presentation of diplomas speaking with eloquence and power teens speaking out boldly for their faith 2015-06-15
John Clark

Tags Book of Acts Christian Crawford Clay Alabama Clay-Chalkville High School come boldly before God's throne of grace having spiritual convictions heartwarming stories for teens Hebrews 4:16 high school graduation ceremony hope for this generation I Timothy 4:12 II Corinthians 3:12 medical emergency not caring what others think prayer of divine healing praying in the name of Jesus at a public school presentation of diplomas speaking with eloquence and power teens speaking out boldly for their faith

John Livingston Clark is 67 years of age and lives in central Washington State. He has written two published books, and two published poems. His initial book is called, " God's Healing Hope: Breaking the Strongholds of Wrong Thinking." His second book, released in December of 2016, is a motivational book written to seniors titled, " Seniors: Are You Retiring or Recharging?" Both books are available on amazon. You can also view his writings on www.faithwriters.com. John is available to speak on a variety of topics. Visit me at jclarkministries.com
Previous Is an Emotional Affair Adultery?
Next Wealth and Wisdom: What I wish I’d Known as a Teen