Breaking News
Home / Heart Warming / Are You A Throne or A Manger? 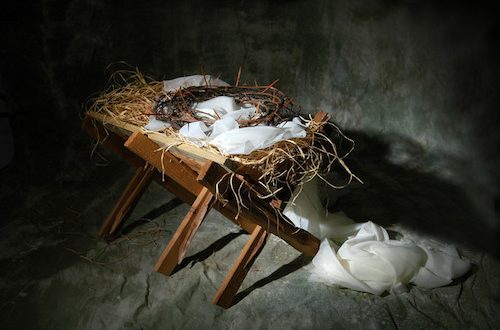 And the day had started with such promise.

Bradley Porter jiggled his leg as he sat at his desk scowling at his assignment. He was a smart boy, earning top marks in every subject. He loved his little Christian school, sporting a pressed uniform and cardigan; but most of all he loved Bible class. He was to be a minister like his grandfather.

“Over prepare,” his grandfather always said. “Then you’ll never be surprised.”

And prepare Bradley did. The assignment was to right a report on a character (of the teacher’s choosing) in the Christmas story, the reward being the privilege of speaking at the Christmas-banquet. Bradley had researched Mary, Joseph, the Wise Men, the shepherds, the inn-keeper, Herod, Jesus and even the angels. But the day’s promise broke like it had come from his father’s mouth.

His teacher, Ms. Butterfield, handed out a neatly folded slip of paper to each student. Bradley had slid his finder in the fold, and took a deep breath.

His brow furrowed when he opened the paper. “The manger?”

Ms. Butterfield smiled. “You’ll think of something, I’m sure.”

When his grandpa picked him up from school, Bradley unloaded the day’s drama with all the anguish of Jesus in Gethsemane. “I studied, and prepared for every possible character! It’s just not fair.”

His grandpa glanced at him and smiled. “A man makes his plans, but the Lord directs his steps.”

His grandpa took one hand off the steering wheel and patted Bradley on the head. “Maybe, God has something for you in this little assignment.”

“That’s a good point. Which begs the question, what kind of a throne is Jesus looking for?”

“Not a throne like I’d choose,” Bradley scowled. “I’d have a golden throne with diamonds and rubies.”

His grandpa chuckled. “Yes. But Jesus is different than us. He chose to live in us, and we are much more like the manger, than we are like your golden throne.”

Bradley’s eyes widened. “Not me! I’m a good Christian. I ace all my scripture tests, never lie, never steal and someday I’ll be a pastor, like you.”

“Oh?” His grandpa nodded and took a deep breath. “And who do you know as unworthy as that manger?”

Bradley turned to the window, staring at the half melted snow mucking up the countryside. Snow could be so beautiful, so refreshing, but when it left it made everything ugly and messy. He exhaled and his breath fogged the window. He bit his lip and drew the figure-eight that symbolized infinity on the window.

“My dad.” Bradley waited for his grandpa to say something, but the steady hum of the engine was the only thing that broke the silence. Bradley clenched his eyes shut. “He said he’d always love me.” Water rose behind his eyes until it broke out, hot water spilling to his cheeks as it would from a dam. “ ‘Forever’. He said, ‘forever’.”

Bradley chased the tears away from his face, but he couldn’t quell the burning ache in his chest. “I hate him.” The words escaped like a fume.

He felt his grandpa’s fingers, calloused and hard as plastic, wrap around his. He chanced a peak at his grandpa, and saw a tear fall from his eye getting lost in wrinkled patterns organic as tree bark.

“You never knew my dad, Bradley. But he was a lot like your dad. Gone.” He drew a slow breath as his eyes narrowed. “He had his reasons, like your dad. And I was mad at him for a long time.You see, that pain you feel, it was put there by him.” Tears fell unchecked down Bradley’s face until a little pool dangled from his chin. “But that hate—that unforgiveness belongs to you.”

Bradley’s eyes narrowed in an accusation.

“ ‘All have sinned and fallen short of the glory of God.’ Unforgiveness is no different. You see, Bradley, you, me, your dad; we’re all that meager manger. And Jesus chose to make us his throne.”

Bradley laid his head against his grandpa’s arm, and cried, “I miss him… I miss him so much.” But once he started, he found he had more to say. “I want to forgive him, but I just don’t know how.” Bradley had found one of those rare moments that only the wisest people can bring a person to, where one can suddenly say what before they’d only felt.

“I know, buddy. Pray about it. No one is so strong at forgiving as Jesus.”

“ ‘While we were yet sinners, Christ died for us,’ ” Bradley whispered, as he felt his grandpa’s heavy hand pat against his head.

“You know the wild thing buddy? Forgiveness, sacrifice … it wasn’t his plan-B. He’s ‘the lamb slain before the foundations of the world.’ ”

Bradley shot up in his seat and looked back at the window. He leaned close and breathed on the glass until the infinity symbol came back into view.

“Grandpa, would you take me to my dad’s?”

Bradley stood on stage sporting a pressed uniform and cardigan, paper trembling like a wind-whipped leaf in his nervous fingers. Though, there was only one person at the whole banquet who made him nervous.

His breath echoed softly from the speakers, like falling snow, as he stared into the crowd, looking at anyone but his dad.

He breathed deep and began- “A historian once said, ‘History wasn’t made for one such as Jesus.’ What he meant was, history has always had a ready pen for stories of the rich and the famous and the powerful. But Jesus was only the son of a peasant carpenter. And perhaps the most obscure character, at the birth of this obscure carpenter’s son, was the manger he came to rest in.

“What an unlikely and unworthy throne for the King of Kings. But consider this; coming to earth and dying for our sins, was not his plan-B. The Bible says he is ‘the lamb slain before the foundations of the world.’ It wasn’t a mistake. Isaiah wrote, ‘he makes known the end from the beginning.’

You see, Jesus chose Mary and Joseph. He chose Bethlehem like he chose the cross. He chose to make that meager manger his throne.

“We are all that manger, meager and unworthy. Maybe you, right now feel like you’re too unworthy, with too heavy a burden. Know this, you are why Jesus left heaven. You are the manger he chose, ‘for the Son of Man came to seek and to save that which is lost.’ Are you lost? Jesus came for you. Are you unworthy? Jesus came for you.

“Jesus said, ‘Behold, I stand at the door and knock. I anyone hears my voice and opens the door I will come in and sup with him.’ Oh meager manger, if Jesus is knocking, will you let him in?

“Perhaps that historian is right. But Jesus didn’t come for the historian’s records. He came instead, to a lowly manger. Dear manger, will you let Jesus rest in you today?”

Only when he was finished did Bradley look at his dad. He was leaning against Bradley’s grandpa sobbing in great big heaves.

His dad had heard the knocking of the king, and opened the door. He was a manger and throne all the same.

While they eating ham and dressing, Bradley’s dad handed him a present. “Open it, buddy,” he said with a smile.

Bradley grinned and ripped the paper away. Inside he found a watch with an infinity symbol on the face, and 10 extra sets of batteries.

“Forever,” his dad whispered in his ear.

Zach Fox lives in Floyd, Iowa with his charming wife, Beka, and four kids. He spent two years in Master's Commission discipleship training, in Kansas City, and is ordained through the FCA. He specializes in writing short stories, and enjoys jogging and basketball recreationally.
Previous Our Hope: Find Your Hope
Next How To Stay Healthy During the Winter Months