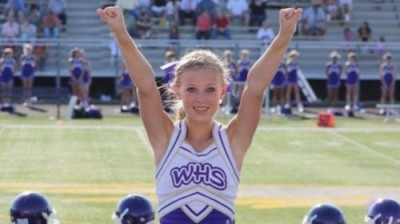 She was in a medically induced coma. When her brain began to hemorrhage and sink into her spinal cord, doctors could do nothing for her. At 14, Taylor Hale was a freshman cheerleader. One day she was playing around and sitting on a car. When it began to move, she slid off and hit her head on the concrete, resulting in a massive injury. She was declared “brain dead” by the doctors treating her and her parents were planning her funeral.

After several days of showing no sign of recovery, doctors told her parents that there was over a ninety percent chance of their daughter never waking up. If she did she would never walk again and would have to have feeding tubes.

One day, her chiropractor came to visit. He felt compelled by the Holy Spirit to pray over her lifeless body. He put his hands on the girls neck and asked God to perform a miracle, that pressure “could be taken off of the brain stem.” Two hours later Taylor began to breathe on her own, and moved her fingers and toes. Soon after that she was sitting up, talking, and even walking.

Taylor has lost all memory of her past, including her childhood, and has no sense of smell. One thing she will recall, however, is walking across the stage on May 18, 2015, at Waukee High School in Des Moines, Iowa, to receive her diploma!

This is not only a story of the miracle power of prayer, but also of a person being sensitive and obedient to the prompting of the Holy Spirit. It also shows the difference between simply praying for someone and praying over them.  One girl is walking around today because of the boldness of another person’s faith. It is heartwarming to realize that God’s Spirit works through ordinary people to accomplish His purposes.

Teens, there is a God who loves us immensely. He has the power to heal and bring deliverance from whatever we are going through, physically or emotionally. Ephesians 3:20 says God “is able to do exceeding abundantly beyond all that we ask or think, according to the power that works within us.”

How about you? Is there someone in your life in need of healing, if not physically, then emotionally or spiritually? Is there some bold step you can take to let the power of God flow through you on their behalf?

brain injury Des Moines Iowa Ephesians 3:20 getting your high school diploma heartwarming stories for teens high school cheerleader laying on of hands miracle healing no memory of the past pressure off of the brain stem promptings of the Holy Spirit Taylor Hale Taylor Hale at high school graduation 2015-06-01
John Clark

Tags brain injury Des Moines Iowa Ephesians 3:20 getting your high school diploma heartwarming stories for teens high school cheerleader laying on of hands miracle healing no memory of the past pressure off of the brain stem promptings of the Holy Spirit Taylor Hale Taylor Hale at high school graduation

John Livingston Clark is 67 years of age and lives in central Washington State. He has written two published books, and two published poems. His initial book is called, " God's Healing Hope: Breaking the Strongholds of Wrong Thinking." His second book, released in December of 2016, is a motivational book written to seniors titled, " Seniors: Are You Retiring or Recharging?" Both books are available on amazon. You can also view his writings on www.faithwriters.com. John is available to speak on a variety of topics. Visit me at jclarkministries.com
Previous Teens: God Is Raising Up a Generation of Power
Next Overcoming Passivity and Control in Marriage