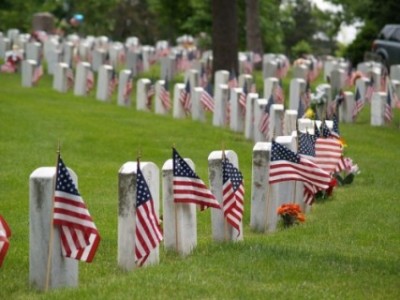 ‘Be strong and courageous. Do not be afraid or terrified because of them, for the LORD your God goes with you; He will never leave you nor forsake you.’  Deuteronomy 31:6 (NIV)

Memorial Day…celebrated every year, on the last Monday of the month. We attend parades, we take flowers to the cemeteries, we watch war movies on TV. We have backyard barbecue’s, inviting friends, family, and neighbors over to chow down and have a good time.  Many communities open their pools for the season this weekend.  And since it is a federal holiday, many of us are given the day off, to enjoy it however we see fit.

Memorial Day was originally named Decoration Day. It was created to honor the fallen from both sides, Union and Confederate, soon after the end of the Civil War. It was celebrated on May 30th, as that was considered the optimal time for flowers to be in full bloom. This was important because placing flowers on the graves of those who died in service to their country was the primary event each Decoration Day.

The name Memorial Day is thought to have been first used in 1882. It was officially declared a federal holiday and its name changed to Memorial Day in 1967. But this short history of the day’s origination does not tell us the real reason behind the need for this celebration.

Our military have died fighting for what they believed in, for their families, their land, for themselves. They died defending the hard-fought and won battle to achieve freedom from oppression and religious persecution that our forefathers participated in. They died because they went when they were asked to go. They fought and died in trenches and on bloody battlefields all over the world, living in difficult situations most of us can only imagine, but prefer not to.

Today’s fight is no different from the very first war our country fought. Freedom was the cause, and freedom is still what we all yearn to preserve. Our pursuit of happiness, our freedom of speech, the right to bear arms, all of these are under attack. Without those who put their lives on the line every day whenever it is required, we would most likely not have the freedoms we enjoy in this nation.

We not only honor the dead from our wars, battles, and skirmishes; we also honor those who join our volunteer armed forces and serve their country, even in the face of death or disability. Past, present, and future military forces are honored. We give thanks to God for those who are willing. We celebrate these people, and their accomplishments, regardless of when, where, how long, they may serve. They may be on a battlefield overseas, or they may be manning a ship in one of our ports. If they are in service, they are serving their country.

As a military mom, with two sons who have been deployed five times between them, I am thankful. And proud. And honored they chose to serve. I have spent many hours in prayer for their safety, and for the protection of all who serve. I am grateful mine came home safe and sound each time. And I know it was God who brought them through. You see, the battle, the war, is His. He is always there, in the midst, leading the charge to freedom.

My family will attend our Memorial Day Parade, and we will remember those who have fought and died.  We will have our backyard barbecue, and we will laugh and enjoy time together. Because we have freedom, we can do this. But we will never take it for granted. We will never forget. We will give thanks to those who serve, and to God who brings the victory.

‘Without the assistance of the Divine Being…I cannot succeed. With that assistance, I cannot fail.’ Abraham Lincoln

Lili lives in central North Carolina. She writes devotionals and Christian articles and has been published in e-magazines, newsletters, and articles. She is a member of Faithwriters.com. She and her husband Chuck love to travel, and are animal lovers as well. They are active in their local church, where she teaches the Senior Adult Sunday School class, and he serves as a deacon. Lili credits God for any inspiration that allows her to write. It's all about Him!
@@ohiolili
Previous Grand Opening of the Ground Zero Memorial Museum
Next What We Offer At The Bottom Line