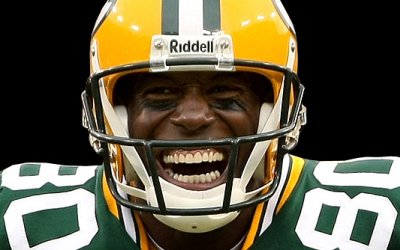 Donald Driver starred for the Green Bay Packers for 14 years though he was not always at the top of his game. Growing up in Houston he was familiar with crime, drugs and being chased by the police. He became very skilled at stealing cars as a teenager. He said if anyone in his family wanted a car moved he would volunteer to do the job. He learned how to drive by being the family’s chalet. He became a pretty good driver earning the nickname “quickie.”

He stole about 20-30 cars he estimates during that part of his life and in all that time he only abandoned a car once. The one time was an “ah ha” meeting that would change his life and setting him in the right direction. This particular time he was starting the car engine and heard screaming police sirens in the background. He quickly stepped on the gas and fled the scene but unfortunately he ran into a grandma’s car while she was backing out of her driveway! He leaps out of the car and starts running. He has a major jump on the police but his conscious overrides his fear of being caught. He turns around and heads back to the scene of the accident to check on the grandmother.

She tells him to sit on the porch as the police quickly approach. The police pull up scoping the scene and are wondering about this teenager sitting on her front porch. “Who is that?” they ask her. She casually answers that’s my grandson. So the police leave and she walks over to “Donald Driver” sitting on the porch yelling “GET IN THE HOUSE. “YOUNG MAN WHY DO YOU DO THIS? YOU COULD BE DOING SO MUCH MORE WITH YOUR LIFE!” Donald didn’t stop stealing cars overnight and he stole 1 or 2 more. But her words echoed in his heart and he finally turned his life around because of her unexpected kindness.

He went to college starring in sports and graduated with an accounting degree from Alcorn State. He was drafted in the seventh round by the Green Bay Packers. He turned out to be a very big surprise for the Packers. He became a 4-time pro bowler and he holds the all-time receiving record for Green Bay. He blossomed all because “Grandma Johnson” (the name he calls this grandma who helped him) showed him unconditional love that one day years before.

Thorns and snares are in the way of the froward: he that doth keep his soul shall be far from them. Train up a child in the way he should go: and when he is old, he will not depart from it. Prov 22:5-6

Greg is a born again believer who testifies to the absolute transforming power of God's word. Greg has been called to full time ministry and He has known Jesus for most of his life. Greg received his degree in Pastoral Ministries from what was formerly Bethany University in Santa Cruz,California. View Greg blogs on iwriteforjesus.com. Greg has a book published on " To Jesus Christ the High Priest of my confession: A personal Testimony." find it on http://www.amazon.com/Christ-Priest-Confession-Personal-Testimony/dp/1507706847/ His testimony in short form is published in "Trials and Triumphs II" on http://www.amazon.com/Trials-Triumphs-II-FaithWriters/dp/1498416012/. This book is filled with 50 inspirational testimonies and is a project of Faith Writers.
Previous Our Hope: The Words We Speak
Next What is the Responsible Love Christ Requires?