Breaking News
Home / Our Hope / Avoid Tribulation at all Costs 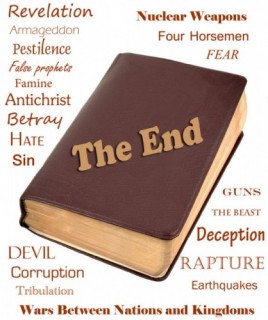 Avoid Tribulation at all Costs

Revelation 3:20 (NLT)—“Look! Here I stand at the door and knock. If you hear me calling and open the door, I will come in, and we will share a meal as friends.

God wants the best for us and He wants us to have eternal life with Him. When we become a believer, we are guaranteed that we will go to heaven. Believe that there is a heaven and a hell. God doesn’t want us to perish in hell; but He gives us ‘free will’ and it is our choice where we go. This is why we Christians talk so much about our hope in Jesus and how he saved us. We don’t want you to be left behind.

The disasters and troubles we go through in this day and age are not the worst that will happen on this earth.  When God’s wrath is released after the “Rapture”, during a time that will be called “Tribulation” for the people left behind, will be the worst time there had ever been on this earth up to this period.  When you read the book of “Revelation” in the Bible, it will explain what will happen during this “Tribulation” period. You need to be a Christian to understand it because then you have the Holy Spirit to teach you and you will have a ‘spiritual vision’.

This time of “Tribulation” will last for seven years during which God seeks, by taking away from man every other hope, to draw him to Himself. Millions will believe in the message of 144,000 Jewish evangelists who have come to say that Jesus was their Messiah. These seven years in which they seek to turn men’s hearts to God are those seven years that the nation was cut short when they crucified their Messiah. They have the opportunity at that time to more than make up for failing to be God’s witnesses during their history.

Psalm 2:11,12  is the solemn advice that David prophetically gives to those who will be living on the earth during the awful seven years of “Tribulation” just prior to Messiah’s return to earth to set up His Kingdom. In the rest of the Psalm, David speaks of this time when the “nations are in an uproar and trying to cast off all influence of God.”

Matthew 24:21-23 (NLT)—For that will be a time of greater horror than anything the world has ever seen or will ever see again. In fact, unless that time of calamity is shortened, the entire human race will be destroyed. But it will be shortened for the sake of God’s chosen ones.

People of this world, the unsaved who do not believe this, will be sorry they didn’t listen when they had the chance. We do not know when, but it will happen whenever God says so. This may be called a doom and gloom theory by the worldly unbelievers’, but it is all true. The “Rapture” is the Christian’s blessed hope because we know that Jesus will come and Rapture his church—all the believers (dead and alive) will be gathered and raised up to meet Him in the air. A word to the unbelievers of the world, it may sound like nonsense to you now, but when you are left behind, you won’t be laughing. (Read 1 Thessalonians 4:13-5:11).

1Thessalonians 4:16-17 (NLT)—For the Lord Himself will come down from heaven with a commanding shout, with the trumpet call of God. First, all the Christians who have died will rise from their graves. Then, together with them, we who are still alive and remain on the earth will be caught up in the clouds to meet the Lord in the air and remain with Him forever.

It will be too late when you are not raptured with the believers of Jesus Christ. God will have given you plenty of chances, before this wicked time of “Tribulation”, to receive Jesus as your personal Savior and Lord of your life. The time is now, do not put it off any longer. If you don’t, you are the one who will put yourself in those perilous seven years. You cannot blame God when you end up in this “Tribulation” period on earth.  He never wanted you to perish.   He will have no choice but to release you when you have denied Him throughout your life. In the name of our Lord, Christ Jesus, I pray for your souls. Amen

I have always enjoyed writing little things, poems, devotionals, little short stories and bible studies. I love God and want to glorify His name and I love praising Him. I live in upstate New York with my Chihuahua-Snowball. My children are grown and left me with an empty nest. I have lots of time on my hands and love to fill it with God's Word.
Previous Army Sergeant Recieves Medal of Honor
Next What Is Truth?