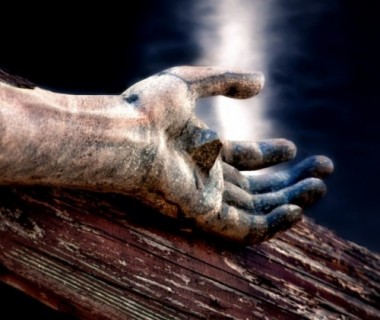 Jesus is our true testament to this verse. His testimony of dying on the cross is the truest form of love. God, the Father, kept His word when He sent His only begotten Son to die. He told Jesus what His life was going to be like. He told Jesus what He was here to do. Jesus was never in the dark about His purpose. He was courageous and showed His strength by going through with God’s plan for Him through obedience to His Father. Even as Jesus was about to take His last breath, and He spoke the words, “Why have you forsaken me?” (Matthew 27:46 and in Mark 15:34); He knew God wouldn’t leave Him there. He knew God would not leave Him in His grave.

In Luke 23:34, Jesus was still thinking of others first and not His own predicament because he said as they divided His garments and cast lots, “Father forgive them, for they do not know what they do.” Then, in verse Luke 23:42 when the criminal next to Him said, “Lord, remember me when You come into Your kingdom.”  Jesus said to him, in verse 43, “Assuredly, I say to you, today you will be with Me in Paradise.”

Plus, in John 19:26-28—When Jesus therefore saw His mother, and the disciple whom He loved standing by, He said to His mother, “Woman, behold your son!” Then He said to the disciple, “Behold your mother!” And from that hour that disciple took her to his own home. He didn’t want His mother to see Him suffer any longer. After this, Jesus, knowing that all things were now accomplished, that the Scripture might be fulfilled, said, “I thirst!” and in verse John 19:30, He said, “It is finished!” And bowing His head, He gave up His spirit. He took care of everybody else before His own needs. That is how much He loved His Father and us.

God didn’t forsake or leave Jesus. God’s unconditional love for us was proven then. When God sent His only begotten and beloved Son to the cross, He was thinking of us. He gave us a way out of our miserable, wretched, sinful darkness. He saved us from eternal torment. Jesus was God’s perfect Sacrificial Lamb to atone for all of our sins of the world. He sacrificed His only Son. God did not forsake Jesus. He used Him as a perfect testament of His love for us.

We are to follow Jesus’ example of obedience to His Father’s will. No matter how drastic or outrageous it may seem at times—God does things for only our best intentions. God allowed His Son to die, but He did not leave nor forsake Him. He did not leave Jesus in the grave. He raised Jesus on the third day to show the world His victory over all of the evil in the world—He beat death and proved He can do anything and everything. He is the Alpha and the Omega—the First and the Last. HIS WILL definitely will be done. God used Jesus to glorify His name in the Highest, truest form. Jesus proved his love for God, His Father, by His obedience. (No matter how hard it is for us to fathom this kind of love—this is our example of God turning a tragedy into triumph). Jesus saved the world.

The only problem is—not everyone chooses to accept this truest form of love—a free gift of life. Why do people deny Him and not believe what He did for them personally? He died for you and me so that we may have eternal life. Once we choose to believe and accept His free gift–we will be forever in His Book of Life. Heaven is our eternal reward for obedience to our heavenly Father. Choose eternal life—the free gift of God’s grace.

Have a Happy Easter and remember why we celebrate this holiday! HE IS RISEN!

I have always enjoyed writing little things, poems, devotionals, little short stories and bible studies. I love God and want to glorify His name and I love praising Him. I live in upstate New York with my Chihuahua-Snowball. My children are grown and left me with an empty nest. I have lots of time on my hands and love to fill it with God's Word.
Previous Be Careful Little Eyes
Next Quiet Desolation