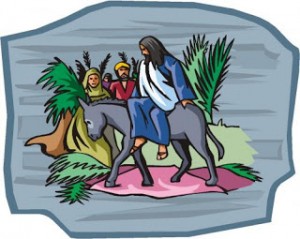 Our Hope: The King Enters Jerusalem

“Rejoice greatly, O daughter of Zion!  Shout, O daughter of Jerusalem!  Behold, your King is coming to you; He is just and having salvation, Lowly and riding on a donkey, A colt, the foal of a donkey.”  Zechariah 9:9 (NKJV)

The holy city of Jerusalem was filled with travelers who had assembled there for the annual Passover celebration.  It was a place of excitement and anticipation as the preparations for the feast and the various activities were in process.

Jesus and His disciples came near the city.  They were coming to Jerusalem tired, dusty, and worn. Jesus had been preaching about the Kingdom of God and performing miracles all over Palestine.  No doubt the disciples were looking forward to the Feast of the Passover, and some much-needed rest.

But as they drew near, Jesus instructed two of His disciples to go to a village nearby, and procure a donkey.  He assured them that if they told the owner that the Lord had need of it, he would be most willing to allow them to take it.  Not only did the owner give them the donkey, but her foal as well.

So the disciples brought the donkey to their Lord, and laid clothes on its back, and then Jesus rode into Jerusalem in triumph.  As He approached, people were spreading their clothes on the road.  Others cut and laid palm branches on the roadway.

“Then the multitudes who went before and those who followed cried out, saying:  ‘Hosanna to the Son of David!  Blessed is He who comes in the name of the LORD!’ Hosanna in the highest!”  (Matthew 21:9)

These people were acknowledging that Jesus was their King.  However, their vision of “king” was of a powerful ruler, one who would take the political system and topple it, and who would free the Jews from the oppression of Rome.  They did not realize that Jesus’ Kingdom was a spiritual kingdom, one that would completely change their hearts and lives, and that would be eternal.

Jesus spent the next days preaching, healing, and spending time with the people.  He had previously reminded His disciples that soon He would be betrayed and crucified, but on the third day He would rise again.  The idea that any harm would actually come to the Master did not come to their minds during this time of ministry in Jerusalem.

The religious leaders, the Pharisees and Sadducees, began to plot against this man who was teaching the people things of which they did not approve.  He was stirring up the people, and causing them to ask questions that the religious leaders themselves could not answer.  In short, Jesus had become a threat.  So they began to hatch a plot that would remove this threat.

In less than a week, the King who had ridden into the city in triumph, on the back of a humble donkey, would be betrayed, beaten, tried, and sentenced to death.  Those who did not take seriously what He had told them would be paramount to the playing out of these events.  Peter, who had said he would never betray his Lord, did, and he did it three times, just as Jesus had predicted.  Judas, who had never really come to know Jesus, or understand who He really was, sold Him to the authorities for a mere 30 pieces of silver.

“But He was wounded for our transgressions, He was bruised for our iniquities; The chastisement for our peace was upon Him, and by His stripes we are healed.”  Isaiah 53:5

Because Jesus was willing, we are indeed healed by His stripes.  His suffering and death brought us salvation, forgiveness and eternal life.  This is why Jesus is Our Hope. And because He is, hope is never far away, never difficult to find, never lost to us who believe.

Hope is ours for the asking.  How have you seen hope arise in the face of hopelessness, and what have you learned about the hope that comes from Jesus Christ?

Lili lives in central North Carolina. She writes devotionals and Christian articles and has been published in e-magazines, newsletters, and articles. She is a member of Faithwriters.com. She and her husband Chuck love to travel, and are animal lovers as well. They are active in their local church. Lili credits God for any inspiration that allows her to write. It's all about Him!
@@ohiolili
Previous The Light Shines From the Law
Next Let It Go!