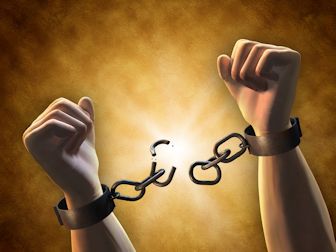 Persecution of believers is happening all over the world, particularly in Muslim countries. Christians are being tortured and even killed for their faith.

The political answer to such oppression is usually war. Might makes right, and because the persecutors are in the wrong, we are justified in defeating them.

Jesus said to Peter, “Put your sword back in place because all who take up a sword will perish by a sword. So, what are Christians to do?

First, we intercede for our Christian kin, standing by them in spirit, because, “When one member suffers, we all suffer together,” (1 Corinthians 12:26). We need to ask God to burden our hearts with their burdens so that we continue to intercede.

Second, we ask God how he desires to solve the problem. Jehoshaphat, in 2 Chronicles 20, faced certain annihilation from three kings. In desperation, he turned to God and prayed, “LORD God… aren’t you the God in heaven? You rule all the kingdoms of the nations. You possess power and might, and no one can oppose you… We will cry out to you in our troubles, and you will hear us and save us… We don’t know what to do, so we’re looking to you.” He acknowledged his own inability to win against the enemy and asked God for his plan.

God delivered some strange instructions for salvation. First, he told Jehoshaphat the battle was not Israel’s, but rather his. Next, he instructed him to send the worshippers out ahead of the army. When Jehoshaphat obeyed, God caused the enemy turn on one another. Israel never shot one arrow.

We must remember that our enemies were also created in God’s image and Jesus died for their redemption as well as ours. So, why not pray that God visits them in supernatural ways, through visions or dreams? Why not ask the Holy Spirit to fall in the middle of a terrorist camp? Would God get the most glory from their deaths or total salvation in Jesus?

When God fought for Israel against ancient Egypt, he told Moses, “That the whole world will know that I am God.” A supernatural wave of repentance and salvation through the Muslim community would certainly show the whole world that God still rules the nations (Psalm 46:10).

Passionate about worship. Passionate about Christians knowing who they are and whose they are and coming into the fullness God expects. Hosted 10 foreign exchange students and love to immerse myself in other cultures.
Previous Sometimes The Answer is “NO”
Next Present Your Requests To God