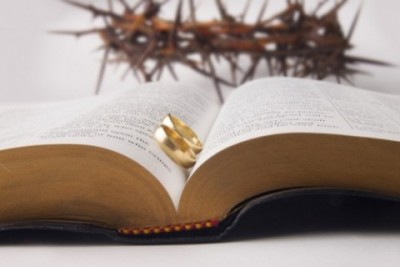 Genesis 2:24 For this reason a man will leave his father and his mother, and will be joined to his wife. And they will become one flesh. (NLV)
The arguments have been heard. The opposing counsel have defended their positions before the high court. A single vote will determine which side of the scale of justice will be favored. The moral compass of a single judge may have the potential to alter the course of our nation’s history.

I cannot understand how we got to this point.

Today, individual’s rights have become more important to the court than the Constitution and the system put in place to protect those rights.

How does “marriage” between same-sex couples take away from a marriage between a man and a woman?

This is not a judicial question. It is a political one.

The question: Have same-sex couples been denied due process? The answer: No. State constitutions are enacted by the government officials elected to represent the people of the state. That is the legal process.

Currently, states are defending their right to determine whether or not they have the authority to only recognize marriage between a man and a woman. Opposing them are individuals claiming that laws prohibiting same-sex marriage is a violation of their rights.

This issue of same-sex marriage will have far-reaching consequences.

Sometimes political debates bring cases to the court that inspire positive societal changes. Other times the divide is a core philosophical difference about right and wrong. It is impossible for a court ruling to promote positive societal change through it’s ruling. Court rulings do not suddenly cause an individual to change their core philosophical or religious belief.

Matthew 19:26 But Jesus looked at them and said, “With man this is impossible, but with God all things are possible.” (ESV)

Whatever the courts decision it will likely intense outrage and backlash.

If the Supreme Court rules to redefine marriage are our options as Christians? Three states have Covenant Marriage legislation. These marriages are set apart. Those who have entered into a covenant marriage cannot simply discard their marriage if they and their spouse have “grown apart.” Counseling is required before entering marriage or departing from it.

God may be calling his Church examine its stand on marriage as a whole. God can use this for His good. Same-sex couples want marriage to include them. If the court obliges their request, start knocking on the doors of the legislators of your state and start a movement to enact covenant marriage laws. Churches can protect themselves from having to perform same-sex unions by enacting by-laws that require them to only perform Covenant Marriage ceremonies. Acknowledge their commitment to each other through a civil union was not enough. They didn’t feel that it legitimized their relationship. They felt set apart.

We as Christians are called to be set apart for God – do our marriages demonstrate that we are?

Will we have a majority court that bulldozes the centuries-old institution of marriage and do what those bringing suit apparently expect them to do? Will they do, as Justice Kennedy eloquently summarized, what is being asked of them to do? Will they be arrogant enough to say “…oh well, we know better.”?

Don’t be discouraged! This just may be God’s way to bring about a “marriage revival.” Maybe marriage, as we know it, has to die in order to be revived.

Would you be support marriage as God intended by supporting Covenant marriage legislation in your state? Would you also demonstrate your support by renewing your vows under such legislation?

Romans 8:28 And we know that for those who love God all things work together for good, for those who are called according to his purpose. (ESV)

Melinda is currently the worship leader at her small church in rural America. Married for 23 years, she and her husband Larry have one son. She is the Director of Mailing in the print/mailing industry by day and freelance author by night. Her desire to write is a passion borne from tragedy. God used it to take her faith to a much deeper level. Melinda is a freelance writer and member of FaithWriters. She joined the TBL team in March 2014. Believing we are citizens of a greater ‘kingdom,’ her articles for The Bottom Line examine governmental responsibility, citizen involvement and current political topics. With the great wisdom contained in scripture as her guide, she looks at today’s political environment from a Biblical perspective. She prays her words will prompt the reader to view citizenship - and every aspect of their life, through the eyes of faith. Col 3:17 To read more of Melinda’s writings on her faith, hope, and life visit her blog Still Living Still Loving or her page at Faithwriters.com. You can also follow her on Twitter @MKZbk.
@@MKBzk
Previous Interview with “Alliance Defending Freedom” Defense Attorney
Next Here Today–Gone Tomorrow