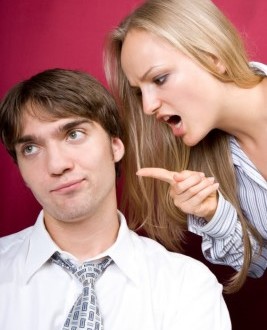 I thought my problem was everybody else! If my spouse just would do what I wanted and when I wanted him to, then I would not get so irritated. If the car in front of me would just go faster then I would not be late for my appointment. If my son would just follow the schedule that I give him, then I would not have to get angry when he does not have enough time to do his chores. And the list goes on and on about who needs to change so that I can live in peace! Life is full of people who rub us the wrong way, rather it is our family, co-workers, neighbors or even strangers.

What if I am the one who needs to change? I lack patience so the Lord brings people into my path that rub me like sandpaper, and I tend to blame the person who is causing me to lose control. If they would just … I would not get SO upset. Oh, how I would remain in peace if I did not have to deal with people that are so different than me!

The Lord brought to my attention just recently in my prayer time that I am praying about God changing other people more than myself. Yikes! My warped view has been, “If so and so changes THEN I can be peaceful and display the fruit of the spirit.” But then I had a revelation, “What if the Lord changes me first?” Could I truly be peaceful even if someone hurts my feelings or annoys me to know-end?

I began thinking about how Jesus would react to people who did not do what He wanted them to do, or how He would respond to someone’s irritation. I tend to react to how others are reacting, but is this Christ’s way? There is a better way to respond to annoying, frustrating, and angry people, and it is not getting on their level. The higher way, says, “Lord, change me.” Jesus dealt with many difficult people while on earth, but He never displayed an attitude of harshness, pride or superiority.

Blaming other people for your bad attitude will not solve anything. Other people should not be allowed to control you, but we should instead be under Christ’s control. Easier said than done, that is why we have to stay connected in a relationship with Jesus and ask Him to fill us with His Spirit.

Don’t let a difficult person determine your mood! Don’t let others determine how you will act. Set in your mind that others’ bad mood or negativity will not change your attitude.

Yes, I can lose my cool in the grocery store with the person in front of me at the 20 items or less check-out counter who clearly has more than 20 items, but If I choose to react I will end-up losing my peace and my joy. I can get angry when my spouse snaps at me at says something to hurt my feelings, or I can give him grace for that time. Perhaps my spouse snapped at me because he is tired or had a long day at work, and did not intentionally mean to hurt me. Sometimes a person will take out their frustrations and anger out on you when you are not really the problem. Try not to take every argument and conflict personally. Disagreements and misunderstandings will happen in relationships, but it is not an excuse to be disrespectful to others. We should speak in love to others, even when we have to deal strongly with them.

If there are people in your life who constantly challenge you and disrupt your peace, then maybe it is time to ask God to change you first.

“If it be possible, as far as it depends on you, live at peace with everyone.” Romans 12:18

What if I became a better person, more like Christ, instead of wanting other people to change first? Would you take this challenge with me?

Stephanie has a heart and passion to see broken lives restored and redeemed through Jesus Christ. She writes through her personal experiences and her educational and professional background. She has over 17 years experience in counseling, and has a Master's degree in Social Work, Bachelor's degree in Psychology, and is a Licensed Belief Therapist. Stephanie has been married for 16 years,and has one grown son. Stephanie's desire through her writings is to bring hope and encouragement to the body of Christ, that no matter what you have been though or going through, there is restoration and redemption through Jesus Christ.
@Stephrreck
Previous Cherish Your Family
Next Waiting on the Wheels: God’s Perfect Justice