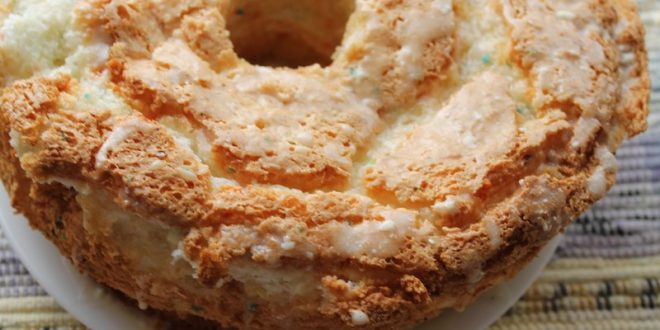 Angel Food and an Attitude

My neighborhood in the 1970’s was like many around the country—filled with local shops owned for generations by neighborhood families. We had a small pharmacy that had assisted those with illness and provided penny candy and small gifts for children for over a century, and the local beauty shop was lined with windows filled with ladies under dryers, rollers in their hair, just as it had been for over 25 years.  But my favorite neighborhood store was the bakery. Just walking in the door was a treat, the smell of fresh doughnuts filling the air as women smiled behind the counter in their pink uniforms complete with matching hats and white-ruffled aprons, asking what they could get for us. For a dime any fresh, iced  doughnut was ours!

With all the delicious goods displayed in the glass case, our family’s favorite was the angel food cake. It was my older brother’s birthday request each year. My mom would purchase an angel food with white icing, bringing it home in a box complete with a twine bow. Happy Birthday was written in blue icing across the top. We never got tired of those cakes.

God decided to bless the Israelites with angels’ food while they were  in the wilderness fleeing their enemies. And they soon grew tired of the miracle food, having an ungrateful attitude and demanding something new and different from God’s Hand:

They murmured and complained, demanding other food than God was giving them.  They even spoke against God himself. “Why can’t he give us decent food as well as water?” they grumbled. Jehovah heard them and was angry; the fire of his wrath burned against Israel because they didn’t believe in God or trust in him to care for them, even though he commanded the skies to open—he opened the windows of heaven— and rained down manna for their food. He gave them bread from heaven! They ate angels’ food! He gave them all they could hold.  Psalm 78:18-25

The 78th Psalm is a cautionary story of ungratefulness and the anger it arouses in God. When His people were given the food of angels, they got an attitude—a sinful one. Their consequences were many, reaching even the younger generation of travelers. The young men met their demise by fire and the young women died before they were of age to sing at their own weddings.

We often have the same sinful attitude about God’s bounty to us, complaining and longing for something different, something someone else has that we feel is much more desirable. But this is still sin in God’s Eyes, and while His grace covers His New Testament believers and He has great patience with us,  we would act wisely to develop a grateful heart and be thankful for the “angels’ food” extended to us.

My husband Dan and I have three children and three grandchildren. We live in central Illinois. I am a graduate of The Institute of Children's Literature, a member of faithwriters.com, and a member of SCBWI. My writings have been published at chirstiandevotions.us, in DevotionMagazine, the PrairieWind Newsletter, and here at thebottomline.co.
Previous The “Altar Call” and “Decisional Evangelism” (part 1)
Next Grace: There is Always Enough!