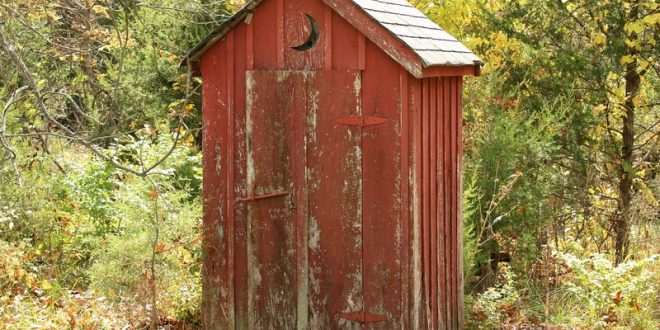 Putting a Pretty Spin on Sin

Before indoor plumbing the outhouse was a necessary fixture on the farm or in the backyard. Not only did the outhouse serve as an early bathroom, it was also the place where household garbage was dumped and the occasional alcoholic beverage was partaken of in secret. But the attempt to put a pretty spin on what went on behind the outhouse door was visible. Hollyhocks in white, pink, and burgundy, were often planted around the outside of the “privy” both to make it look lovely and so that the refined lady passing through and in need of facilities did not have to inquire about where they were located–an unladylike behavior! The half-moon shape cut into many outhouse doors, an ancient symbol of womanhood, meant that an outhouse was for ladies’ use only.

But just like the smelly, fly ridden reality of the outhouse in olden times, you can’t put a pretty spin on sin! Oh, we try to pretty it up by renaming it as a weakness or a missing of the mark. We find ourselves comparing our sin to that of another to reassure ourselves that we are not the worst. Perhaps we are guilty of taking advantage of God’s grace when we re-offend with free forgiveness in mind. But God’s Word is clear on what sin is in His Eyes, and that is the only way that we can truly look at sin if we are wise:

Now the practices of the sinful nature are clearly evident: they are sexual immorality, impurity, sensuality (total irresponsibility, lack of self-control), idolatry, sorcery, hostility, strife, jealousy, fits of anger, disputes, dissensions, factions [that promote heresies], envy, drunkenness, riotous behavior, and other things like these. I warn you beforehand, just as I did previously, that those who practice such things will not inherit the kingdom of God.  Galatians 5:19-21

Some things just can’t be made pretty for all of our efforts. Like an outhouse that looks attractive and attention-drawing, sin appears inviting to us until we open the door and found out too late what awaits us on the other side! Allow God’s conviction in His love for you to move you away from sin in whatever form it takes.

My husband Dan and I have three children and three grandchildren. We live in central Illinois. I am a graduate of The Institute of Children's Literature, a member of faithwriters.com, and a member of SCBWI. My writings have been published at chirstiandevotions.us, in DevotionMagazine, the PrairieWind Newsletter, and here at thebottomline.co.
Previous Which Church is the True Church?
Next Reaching And Resting Godward