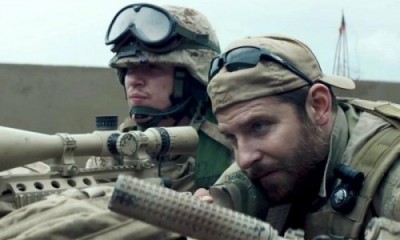 “American Sniper” was released on January 16th. In short, the movie portrays the life of the late U.S. Navy SEAL, Chris Kyle (Bradley Cooper), in which he wrote about in his book American Sniper: The Autobiography of the Most Lethal Sniper in U.S. Military History. Kyle was credited with 160 confirmed kills by the Department of Defense and was quickly given the nickname “Legend.”

After Chris Kyle and his wife, Taya married, he was deployed several times to Iraq following the September 11, 2001 attacks. After many leaves back home for the birth of his son and daughter, Kyle struggled to adjust. It wasn’t until he was encouraged by his psychiatrist to help other wounded veterans that he began to regulate to his home life.

Since the movie’s release, there have been many alternating views on Kyle and his job as a sniper.

Many see Chris Kyle’s story as a reason to be anti-war or against violence. Michael Moore came out on social media saying; “My uncle killed by sniper in WW2. We were taught snipers were cowards. Will shoot u in the back. Snipers aren’t heroes. And invaders r worse.”

He later clarified his statement in a follow up, “But if you’re on the roof of your home defending it from invaders who’ve come 7K miles, you are not a sniper, u are brave, u are a neighbor.”

Along with Moore, Seth Rogen and others have been quoted criticizing the movie and the story of the “American Sniper.” Rogen has also since clarified his earlier comments.

Due to these statements, others have stood up in the movie’s and soldier’s defense in the matter.

Newt Gingrich took to social media saying, “Michael Moore should spend a few weeks with ISIS and Boko Haram. Then he might [email protected] I am proud of our defenders.”

Despite what I have heard to be Bradley Coopers greatest performance, “American Sniper” has opened up a far greater debate than many may have realized. It used to be a matter of “did Hollywood portray that person’s life correctly?” But with the aid of Clint Eastwood and Kyle’s wife, Taya, making the story as true as possible, we know that isn’t the issue.

Now this movie has become a focal point for people to stage a debate for Guns vs. Anti-Guns, War vs. Peace, Snipers vs. fill in the blank.

Which side of the debate do you find yourself on?

Although graduating with a Communications degree from Liberty University in 2008, I took a long break from writing until finishing my Master's in Education this past year. I currently reside in Lynchburg, Va with my wife and two children. By day, I work in insurance and by night I am a writer. When not playing with my kids and spending time with my wife, I enjoy spreading God's word through my writing.
Previous Help! I am an Alcoholic.
Next The Lure of Magic, Part I