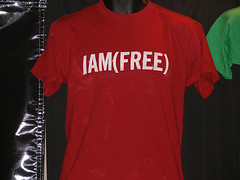 Co-Founder Of Newsboys Now An Atheist; Says He Will Expose Christian Music

There are many threats to Christianity. Since prayer was taken out of the schools over fifty years ago, Atheist have sought to silence Christianity. Atheism now has a new soldier in the battle.

“Thinking about writing a book (with a ghostwriter) exposing the Christian music industry”?

“My new years resolution is to pick on religion more”.

I don’t wish to make this an indictment of Mr. Perdikis as I know some Christians will do, but I feel it is important to inform you of what he plans to do and ask the question: “Isn’t there a greater threat to Christianity than Atheism or even Islamic Terrorists?”

Mr. Perdikis wished to be free from God and religion unable to stand under the weight of God’s law. Like so many, he lacks understanding that true freedom only comes through Christ Jesus. One of the “Newsboys” T-shirts bears the logo “I Am Free.” If only Mr. Perdikis, and so many like him could have eyes opened to see where true freedom comes from.

In an interview with Christopher Tanner; Co-Host and PR director of Atheist Analysis posted on You Tube Jan. 4th 2014, Mr. Perdikis had a lot to say about Christianity. He said:

“There is a lot of filth and laundry that needs to be aired; and it shall be.”

“They (the Christian music industry) need to be held accountable for their crimes against humanity”.

Mr. Perdikis stated there are a lot of people in the industry that are just exploiting others for their own greed and they attract many vulnerable people. He considers himself a victim of Christianity. He wishes to warn people and stop Christians from preaching their message.

“The music is designed to manipulate their audience into believing.”

Mr. Perdikis describes the Movie “God Is Not Dead”, where the “Newsboys” perform their song by the same name, as:

“Demonizing everyone who is not Christian. That is how they view everyone else.  They live life in a veil of separation and feel that they are superior and they feel they are enlightened. It is a false reality.”

Mr. Perdikis is not to be demonized as he has accused Christians of doing. There is some truth in what he has said and we as Christians ought to pay heed.

In my prior article “Stand Or Fall”, I asked the question: “Shouldn’t we examine ourselves?” The greatest threat to Christianity is not Atheists or Islamic Terrorists. The greatest threat to Christianity is inside the very four walls of the Church. Having only a “form of Godliness” and using worldly programs and strategies to save the lost; has the Church only given many a false conversion? The Preacher, Paul Washer, calls it a “spiritual miscarriage.” Have we replaced seeking the power of God to save with these worldly simple plans of saving them?

Since the Apostle Paul warned that many would fall away from the faith believing in all manner of false teachings, the Church has always been threatened from within. Our unwillingness to examine ourselves through the light of scripture leaves us vulnerable to Satan’s attacks. Too often, it takes someone like George Perdikis to cast that light on Christianity. Mr. Perdikis has fallen from the faith. Many have and many more will. Shouldn’t we be asking; why? Has our religion become empty of the power of God to save? Is there something missing; and is that something; God?

I am a layperson with 35 yrs. of teaching Sunday School, bible studies, and preaching on occasion. I teach a bible study in a local prison. I am a 36 yr. counselor/social worker. I am disabled and have devoted the past four years to studying, praying, and writing about my greatest love; this gospel of Jesus Christ that has the power to save a man's soul. I also write devotions for a Church in Marion, VA and I write for an orphanage/ministry in Zambia, Africa.
Previous Keeping It Real On Social Media
Next Our Hope: His Mercy Endures Forever!