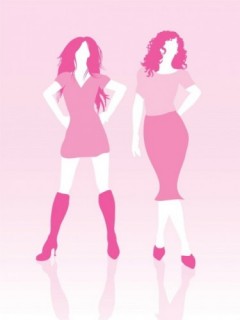 I never seemed to look like the women in the glamour magazines, I am part Native-American and part French. Growing up, I felt so inferior and defined my beauty by magazines and women I saw on T.V. and movies. I did not have anyone at home to tell me that I was pretty or more importantly that God saw me beautifully because I was His child. As a child, I never heard the words, “You are beautiful.” As you can imagine, I never felt beautiful, and when I compared myself to what the media showed was beautiful, I failed miserably.

Girls will compare themselves to what is out there in the media. They will see this fake prototype of a female and say, “I am not tall enough, I weigh too much, or I’m not flawless.” Most girls begin to get early exposure to what a female “should” look like through animated cartoons. The Institute on Gender in the Media reported that roughly 25% of the female characters are shown in sexy, tight, alluring clothing (usually with exposed skin between mid-chest and upper thigh). The National Institute on Media and the Family reported in a study on fifth graders that 10 year old girls and boys told researchers they were dissatisfied with their own bodies after watching a music video by Brittany Spears or a clip from the T.V. show “Friends.” Another study concluded that at age 13, 53% of American girls are “unhappy with their bodies.” This number grows to 78% by the time girls reach 17. Not only do these false images develop an unhealthy perspective, they can also lead to unhealthy eating habits.  The National Institute of Mental Health estimates that eating disorders affect more than 5 million Americans each year. Males account for only 5 to 10% of bulimia and anorexia cases. According to the Center for Mental Health Services 90% of those who have eating disorders are women between the ages of 12 and 25.

The standards the media has portrayed for defining beauty is almost impossible to attain. Girls who compare their body images continually to that of the media, could develop eating disorders, low self-esteem, depression, engage in cutting, and develop a fixation on being perfect. These girls will develop into women who will struggle with their appearances, and will go to great lengths to ensure their beauty, such as with surgeries and implants, Botox, and weight loss supplements. Teenagers as young as 16 are undergoing the “knife” for bigger and better body parts. Media portrays being thin and seductive as attractive. If young girls have no one telling them any differently, does the culture then define beauty for them? This would explain why we see so many scantily-clad girls and women wanting to change their bodies.

Ladies, do not compare yourselves to the media’s definition of a woman. Most, if not all of these women are air-brushed or have a team of make-up and hair artists. Stop comparing yourself to this false portrayal of women.

Your beauty should not come from outward adornment such as braided hair and wearing of gold jewelry and fine clothes. Instead, it should be that of inner self, the unfading beauty of a gentle and quiet spirit which is of great worth in God’s sight. 1 Peter 3:3

Charm is deceptive, and beauty is fleeting; but a woman who fears the Lord is to be praised. Proverbs 31:30

I praise you because I am fearfully and wonderfully made; your works are wonderful, I know that full well. Psalm 139:14

“More Beautiful You” by Johnny Diaz

Stephanie has a heart and passion to see broken lives restored and redeemed through Jesus Christ. She writes through her personal experiences and her educational and professional background. She has over 17 years experience in counseling, and has a Master's degree in Social Work, Bachelor's degree in Psychology, and is a Licensed Belief Therapist. Stephanie has been married for 16 years,and has one grown son. Stephanie's desire through her writings is to bring hope and encouragement to the body of Christ, that no matter what you have been though or going through, there is restoration and redemption through Jesus Christ.
@Stephrreck
Previous Weeds Are My Enemy
Next Guard Your Heart