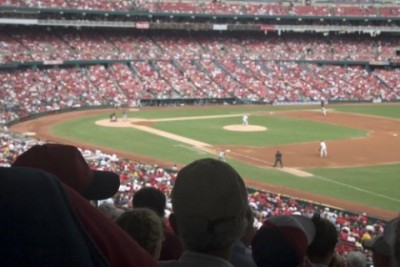 The world of competitive sports comprises an increasingly large sphere of American culture.

Families spend hours ushering their young children to and from athletic practices and games.  High school athletes spend a large portion of their free-time involved in these activities.  Thousands gather in stadiums or in their homes to watch any college or professional game.

As a former athlete and sports enthusiast, I understand the attraction.  I grew up loving sports, playing whenever I had the opportunity, spending 10-20 hours a week at practices and games in my high school years.  After college I coached basketball and volleyball teams.

Having now been separated from the world of sports for several years, and being a mother with a young child, I have felt the need to look at sports from a broader perspective.  What are the benefits of athletic involvement?  What are the negative elements of this culture?  Ultimately, our family will need to decide how much of our lives we want to dedicate to competitive sports.

1. Athletics can be a means of teaching and learning discipline and godly character.

I learned to stay committed to an activity and persevere, even when it was hard and caused me physical pain.  These lessons can transfer over to other areas of life as well.  In his book, “Glory of the Games,” Chad Bonham shares Biblical insights and lessons learned from athletes such as Josh Davis and Shannon Miller. http://www.amazon.com/Glory-Games-Chad-Bonham/dp/1938254023

One of my favorite quotes is from Eric Liddell, an Olympic runner and missionary to China.  “I believe God made me for a purpose, but he also made me fast, and when I run, I feel his pleasure.”  For Liddell, running wasn’t his primary purpose in life, but it was something he had been given the ability to do well, so he ran to bring His Maker pleasure.  Eric Liddell’s Olympic story is told in the movie, “Chariot’s of Fire.”  The dedication this man showed in his running was lived out in his life as a missionary and eventually led to his death in a Japanese internment camp in China.

In his book, Glory of the Games” Chad Bonham writes, “The ones that have always stood out to me the most are those that understand the true purpose behind their athletic success.  These Olympians have come to realize that they have been blessed with athleticism and drive in order to bring glory to God and share with others the hope that accompanies a relationship with Jesus Christ.”

3. Godly athletes can be good role-models.

By a godly athlete, I don’t mean any athlete who takes on the label of being Christian, but an athlete who exhibits a godly character in every-day life.  While over at a neighbor’s house, I watched three young boys excitedly re-enacting a football game they had just seen.  Every now and then, one of them would shout out, “Do the Tim Tebow!”  At this, they would all stop what they were doing to get down in Tebow’s trademark position of prayer.  Then they would resume their previous activity.

Ani Ma’amin discusses nine praiseworthy athletes in his article, “9 Christian Athletes Who Stand Up For Their Belief in Christ.” http://www.ccsouthbay.org/blog/christian-athletes

A successful team requires a certain degree of bonding and trust among the players and their coach.  You spend many hours with your teammates and coach, come to know them and develop relationships with them.  It is a humbling experience to realize that you are not the best at something (or everything) and need the help of those around you to accomplish a task.

With the adrenaline pumping, fully immersed in the heat of the moment, athletes may find themselves more susceptible to anger, hatred, and a desire to tear another person down.  The spectators are not exempt from displaying ungodly behaviors either.  People who are normally mild-mannered may find themselves yelling at the T.V. screen over a bad call or a poor play.

2. Competitive athletics promotes an attitude of pride and being the best.

The main goal of competition is to be the best and to win.  Pep rallies are focused on bringing a community together and raising school spirit by promoting the idea that their school/team is the “best”.  Unfortunately, this focus on being “Number 1” goes against the Biblical idea of “regard one another as more important than yourselves” (Philippians 2:3).

3. Ungodly athletes are not good role-models.

Although many professional athletes seem to show discipline in their training, this same discipline doesn’t carry over to their personal lives. Mark Galli wrote an article for Christianity Today titled “Christian athletes Are Not Role Models.”  In his article, Galli gives examples of several athletes who wear the title of Christian but whose lives are anything but Christ-like. http://www.christianitytoday.com/ct/2013/january-web-only/christian-athletes-are-not-role-models.html?paging=off

4. Competitive athletics can unify people in a negative way.

Sports has always had the ability to bring people together.  It unites them under one team spirit.  But what is that spirit?  In many countries, fights and riots break out once the game has ended.  The current Super Bowl trend is for rioting to take place in the city of the winning team.

5. For many people, sports becomes an idol.

In Exodus 32:1, the people wanted a god who would go before them, so Aaron made a golden calf – an idol.  An idol is anything that goes before us – anything we follow and give our lives to.  For many people, following or being involved with a sports team becomes of primary importance in their life – it becomes their idol.

6. Athletics takes time away from the family and from real, healthy relationship.

Time spent watching or participating in athletic events is not time spent with the family, engaging in real, deep, lasting relationships.

7. The world’s misunderstanding of love and what constitutes a healthy relationship can lead to distortions in relationships on a same-gender team.

In Albuquerque, the problem has become common enough that there is a ministry geared towards young female athletes who are at risk for being drawn into the lesbian lifestyle by older athletes and even coaches. The article below represents one of the few reported incidences of this type of occurrence.  http://www.sportswave.ca/hockey/female-coach-preyed-on-15-year-old-player/

Sports are fun and invigorating.  They are fun to watch and fun to play.  However, the sports culture of America involves more than just fun.  As with any activity, we need to use discernment and the guidance of the Holy Spirit to determine if and how much time is beneficial to be given to sports.

*Note: I have used the term “competitive sports” to refer to the sports culture in America and to differentiate from the occasional recreational sporting event.

I was born and raised in the plains of Kansas. After high school, I moved to Omaha, Nebraska where I graduated from Grace University with a Bachelors in Bible and Elementary Education and an endorsement in ESL. A couple of months later, I moved to China and taught ESL at an International school for three years. It was during this time that I became a member of Faithwriters. In 2010, I moved back to the U.S. and taught for one year on the Navajo Reservation. At the end of that year, I moved to Albuquerque where I met and married my husband. I now have beautiful baby girl and work part-time as a writer and a tutor.
Previous Just In Time!
Next Reflections of Glory