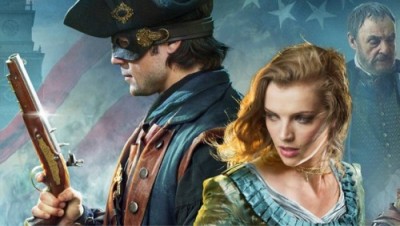 Homeschool Graduates Produce Movie To Be Shown In Theaters

You never know what may happen when two people follow their adventurous spirit and passion. In the case of two cousins it has resulted in a major motion picture, “Beyond the Mask”, to be shown in theaters beginning June 5, 2015. It is also a testimonial to homeschool education.

Aaron and Chad Burns, with other members of their family, started making short films, “just for the fun of it.” One thing led to another, and in 2011 they formed the Burns Family Studios. Chad said homeschooling helped prepare him and his cousin for their movie-making roles. “In the homeschool environment, there is a lot of diversity of age and ability and attitudes…and working with people ahead of us and behind us, and when it came to building the huge eclectic that created” the movie, “that was a huge strength.”

“Beyond the Mask” was put to the test on April 6 when it premiered for one night only in theaters. It was so well received it broke the record for the largest on-demand opening. What is the reason for its initial success? Some faith-based films have done very well at the box office in the past. Add to this, 800 visual effects! I believe the real reason is that God honored the motives of these two individuals who have a heart that seeks God.

The production team consisted of 400 homeschool graduates who volunteered as workers, actors, and extras. The main stars are Andrew Chaney of “Seasons of Gray”, Kara Killmer of “Chicago Fire”, and John Rhys-Davies of “Raiders of the Lost Ark.” The movie is being billed as a “faith-based adventure celebrating grace, liberty, and the true freedom that can only be in Christ.” It is set in the era of the Revolutionary War.

This is also an inspiring story of two young men who had a dream to produce God-honoring motion pictures. They followed the teaching of I Corinthians 10:31, that “whatever you do, do all to the glory of God.” The movie will most likely be a huge financial success, but more importantly, may it draw viewers into a relationship with God’s love and freedom.

What desires, dreams, or passions, do you have in your life that can be put to use to honor God and share his love with others?

"Beyond the Mask" "Beyond the Mask" official movie trailer Aaron and Chad Burns Andrew Chaney do all to the glory of God homeschool education homeschool graduates I Corinthians 10:31 John Rhys-Davies Kara Killmer visual effects 2015-04-16
John Clark

John Livingston Clark is 67 years of age and lives in central Washington State. He has written two published books, and two published poems. His initial book is called, " God's Healing Hope: Breaking the Strongholds of Wrong Thinking." His second book, released in December of 2016, is a motivational book written to seniors titled, " Seniors: Are You Retiring or Recharging?" Both books are available on amazon. You can also view his writings on www.faithwriters.com. John is available to speak on a variety of topics. Visit me at jclarkministries.com
Previous How Healing and Deliverance are Connected
Next No News Is … No News