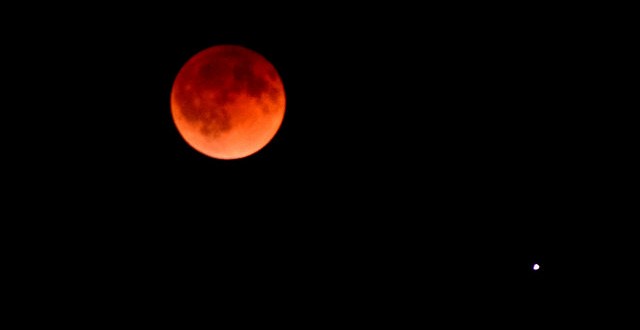 Did you catch Four Blood Moons when it premiered on March 23, for a special one-night event? If you didn’t, box office numbers say you should. The film saw 150,000 moviegoers attend the event this past spring, causing a ripple effect among viewers and the production team to run the film on nearly 650 screens across the country.

The docudrama is based on Pastor John Hagee’s New York Times best-selling book of the same name, which has 750,000 copies in print. The film released June 23, on DVD and as of mid-July has seen sales of nearly 33,000, making it the top-selling DVD at CBA-market retailers in its first two weeks. It ranks fifth on the CBA DVD list for the month of July.[1]

The film explores the rare lunar phenomenon that has coincided with large-scale events for the Jewish people—both positive and negative.

“The heavens are ‘God’s billboard,’” Hagee says on the film’s dedicated website. “He’s been sending signals to earth, and we haven’t been picking them up. Two blood moons, in 2014 and 2015, point to dramatic events in the Middle East and, as a result, changes in the whole world.”

By aligning Scripture, history and science, Hagee reviews previous lunar occurrences and explores the meaning for the current four blood moon cycle, while challenging Christians and humanity as a whole to pay attention to how God uses these celestial events to communicate.

“Four Blood Moons combines Scripture, science, history and big-screen live action spanning centuries, including previous similar lunar occurrences and the earth-shaking changes around them,” a press release for the movie said.  “It also examines our current four blood-moon cycle—and its possible meaning for Israel, the Middle East and the world.”

Genesis 1:14 says, “And God said, ‘Let there be lights in the vault of the sky to separate the day from the night, and let them serve as signs to mark sacred times, and days and years” (emphasis mine). We’ve read how God used His marvelous universe in the past to guide and direct: when the wise men followed the star to Bethlehem; when the sun stood still to see Israel victorious; and when God made His covenant with Abraham and promised him descendents that would be as “numerous as the stars in the sky.” (Genesis 22:7)

God has used the sun and the moon and the stars to proclaim His sovereignty as evidenced in Scripture. But what about the blood moons? Among the verses that speak to these occurrences—and some that Hagee’s film explore—are:

Have you seen the film? Do you believe these are the signs that God refers to in Scripture? And should we be paying more attention?

is a freelance writer and contract copywriter who lives in the seacoast region of New Hampshire with her husband, Eric-Thomas,of five years. She currently serves alongside her mother as the Marketing Director for God’s Girls Christian Store and More, a online retail store serving the southern New England region. Her work has been featured in several print and online publications, and she is the recipient of two Faithwriters’ Editors Choice Awards for her short stories, which are scheduled for publication in the Mixed Blessings series. Her first book, Fragile: 30 Days of Hope for the Anxious Heart, is now available at samanthaarroyo.com. She can be reached at [email protected].
Previous You Don’t Have to be Perfect For God to Love You
Next Satan’s Voice Is Like the Song of the Sirens