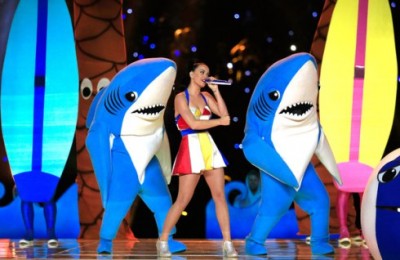 “Today is the day that the Lord has made! I will rejoice and be glad in it,” the singer wrote to her nearly 65 million Twitter fans.

The 30-year-old pop-music sensation was born to Pentecostal preachers, and while she grew up very conservative, she later renounced her faith, telling Marie Claire in 2013, “I’m not Buddhist, I’m not Hindu, I’m not Christian, but I still feel like I have a deep connection with God. I pray all the time — for self-control, for humility. There’s a lot of gratitude in it. Just saying ‘thank you’ sometimes is better than asking for things.”

And yet, earlier in the interview, she quoted scripture. “I always resort back to Scripture: Pride comes before a fall,” she said when referring to the importance of remaining vulnerable in the spotlight.

But later: “I don’t believe in a heaven or a hell or an old man sitting on a throne. I believe in a higher power bigger than me because that keeps me accountable.”

Given the tell-all she gave to Marie Claire, there’s no guessing where the artist stood in regards to faith and religion back in 2013. But what about now? Could she be having a change of heart?

Just before the show, Perry told reporters, “I’ll be performing maybe for the first time for some of these people. This might be the first time people see me ever performing, and I get to play these songs. And to me, they’re very uplifting. So I just feel like in some ways it’s a spiritual experience for me, a little bit.”

While her show was filled with under-the-sea creatures and a ride on a shooting star, her set list also included her controversial single “I Kissed a Girl” and some risk-ay dance moves with Lenny Kravitz. Kravitz daughter even gave him a hard time after the show for “twerking” with Perry.

After the Super Bowl appearance, Perry got inked: XLIX is now permanently etched into her finger while the Super Bowl Half-Time Show is still etched on the minds of many fans.

What are your thoughts? Could Perry be turning a spiritual corner?

is a freelance writer and contract copywriter who lives in the seacoast region of New Hampshire with her husband, Eric-Thomas,of five years. She currently serves alongside her mother as the Marketing Director for God’s Girls Christian Store and More, a online retail store serving the southern New England region. Her work has been featured in several print and online publications, and she is the recipient of two Faithwriters’ Editors Choice Awards for her short stories, which are scheduled for publication in the Mixed Blessings series. Her first book, Fragile: 30 Days of Hope for the Anxious Heart, is now available at samanthaarroyo.com. She can be reached at [email protected].
Previous Whose Report Will YOU Believe, God or Man’s?
Next Living Life Sober-Causes and Symptoms of Dry Drunk Syndrome