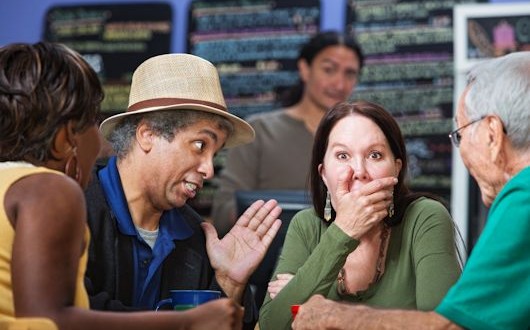 “Mind Your Own Business!”

This week, my husband and I hunkered down with the remote and came across the reality TV show, “What Would You Do?” If you are unfamiliar with program, it’s essentially a social experiment. Host and news correspondent, John Quiñones, and the crew create scenarios that take place in public settings and then capture people’s reactions with hidden cameras, essentially forcing them to answer the question “What would you do?”

Viewers are left wondering: Will the witness intervene or will he mind his own business and walk away? For example:

You witnessed a group of teenagers harass a homeless man on the street?

Or saw a restaurant manager sexually harass one of his employees in front of customers?

Or heard a group of boys pressuring a peer to get high off cough syrup?

Or, in the case of Friday night’s re-run, what would you do if you found a baby left alone in a hot car?

It’s an epidemic: approximately 38 children die from heat stroke each year from being trapped inside a motor vehicle.[1] That’s one life lost every nine days.

In Friday night’s episode, the cameras show an actress placing her baby in the backseat of the car while she runs a couple errands nearby. The child, though only a doll, resembles a lifelike baby—with shrilling cries and all. A handful of hidden cameras capture the action as men, women, couples and families pass by despite hearing the child’s cries.

Check out the video to see how it all plays out:

At the end of the episode, one real-life mom made a comment that struck a chord with me: “One of the biggest problems of today’s world is: nothing’s ever anyone’s business anymore.”

Is she right? Should we be stepping up more often? What about personal privacy? What about a person’s free will? What about their rights?

Is the mother in the above scenario no different? She felt it was okay to leave her child in the car while she grabbed a cup of coffee. Isn’t it her right to make that decision? Is this considered a parenting issue—a choice?

I wonder if that’s what people were thinking as the passed by . . . Is that why they didn’t get involved?

Personally, I think the issue is cut and dry: speak up. Do something.

Isaiah 1:17 says, “Learn to do right; seek justice. Defend the oppressed. Take up the cause of the fatherless; plead the case of the widow.”

One pastor put it this way, “I’ll leave you with 1 Corinthians 10:31: ‘So, whether you eat or drink, or whatever you do, do all to the glory of God.’ Ask yourself when the opportunity to meddle presents itself, ‘Will my becoming involved in this situation be for the glory of God, or is it a hindrance to Him?’”[2]

There is a time to be still, to mind your own business (1 Thessalonians 4:11), but there is a time to step up, too. To defend the rights of the defenseless. To speak up for those who cannot speak for themselves. To speak truth. To be a light in a dark place.

is a freelance writer and contract copywriter who lives in the seacoast region of New Hampshire with her husband, Eric-Thomas,of five years. She currently serves alongside her mother as the Marketing Director for God’s Girls Christian Store and More, a online retail store serving the southern New England region. Her work has been featured in several print and online publications, and she is the recipient of two Faithwriters’ Editors Choice Awards for her short stories, which are scheduled for publication in the Mixed Blessings series. Her first book, Fragile: 30 Days of Hope for the Anxious Heart, is now available at samanthaarroyo.com. She can be reached at [email protected].
Previous We All Need a Real Friend
Next Christian Teens and Yoga: Are You Worshiping Other Gods?