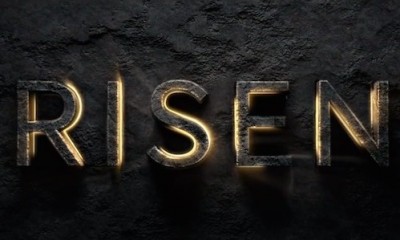 New Movie, Risen: A New Spin on an Old Favorite

Entitled “The most successful Christian movie ever in terms of box office gross,” Passion of the Christ starring Mel Gibson remains one of the most popular and effective movies about Jesus’s death and resurrection. But in 2016, this well-known movie might be getting some competition in the form of the new Christian movie, Risen. This is a biblically inspired film that captures the events following the crucifixion and resurrection of Jesus Christ. What sets this movie apart, is that the story is told from the perspective of an unbeliever.

You’ve heard right, the main character, Calvius, played by Joseph Fiennes, is an unbelieving roman military official sent by Pontius Pilate to uncover the mysteries surrounding Jesus’ death and to dispel any rumors of His rising from the grave. Calvius’ quest for the truth will lead him to find exactly just that… the truth. And this truth will change his life forever.

It is a fact that the crucifixion story has been retold several times. Also, there are a handful of Christian films out there with this account as well. However, most of them depict the events leading up to and during the death, burial, and resurrection of Jesus. But there has never been a movie that actually seeks to highlight the continuation of what happened after the resurrection and ascension of Jesus. Moreover, none that illustrates the events from an unbeliever’s perspective.

According to christianpost.com, other top characters in the movie includes Cliff Curtis who plays Jesus, Tom Felton who plays Lucius (Calvius’ assistant), and Peter Firth playing the role of Pontius Pilate. The movie is produced by LD Entertainment and distributed by TriStar Pictures/AFFIRM Films. Risen is said to be released in January of 2016.

Galatians 6:9 encourages us with these words, “And let us not be weary in well doing: for in due season we shall reap, if we faint not.” We all know that the entertainment industry is not in a rush to produce awesome Christian films. That is why it’s very inspiring to know there are still a few people in the entertainment business who are not getting weary in finding new ways of sharing Jesus with the world. We too might get weary with sharing the same crucifixion story over and over again. But the truth is, others need to hear it, and we are graced with the task of telling them. The bright side is, we can always find new ways to tell an old story.

What are your views on the movie industry producing more films based on the crucifixion story?

Check out the trailer for Risen here!

Amelia Brown is from the beautiful island of Jamaica. She is a 28 year old Guidance Counselor by profession, but a passionate writer at heart. Most of her articles written are aimed at stimulating positive change under the guidance of the Holy Spirit. She is also a published poet and a member of Faithwriters. Outside of writing, she enjoys volunteering, cooking, and turning frowns right side up. Amelia currently lives in New York.
@ameliambrown
Previous Jesus Built the House
Next Order From Chaos? Is There a Trick to Making Halloween a Treat?