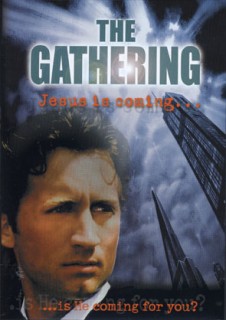 “The Gathering-Jesus is Coming” Movie Review

Luke 21:36 (NKJV)—“Watch therefore, and pray always that you may be counted worthy to escape all these things that will come to pass, and to stand before the Son of Man.”

I have always been interested in the end-times prophecies. This end-times Christian drama came out in 2003. The message is the same that it always has been; only we are closer to the Rapture today than we were eleven years ago.

“The Gathering” is a powerful portrayal of Christ’s return and the coming Tribulation. In this film, the main character, Michael Carrie, a successful marketing executive has visions that convince him that the “Second Coming” could happen at any time; and tries his best to warn family and friends. His wife and mother-in-law are not interested in his Christian views. They start getting their own visions. His co-workers do not want to hear it either.

This movie will create thoughts and discussions on preparing one’s heart for Christ’s imminent return. It can be used as an evangelical tool. It is designed to encourage people to heed the warning signs of prophecies being fulfilled. I thought this was a good interpretation on what it could be like the nearer we get to the Rapture.

There is a part in the movie where the wife is having a vision in a grocery store and the guy ahead of her gets arrested. The following verses are in regard to the Tribulation period and the antichrist. They also explain what happened to that man. (Hint: He didn’t have the mark).

Revelation 13:16-18 (NKJV)—16) He causes all, both small and great, rich and poor, free and slave, to receive a mark on their right hand or on their foreheads, 17) and that no one may buy or sell except one who has the mark of the name of the beast, or the number of his name. 18) Here is wisdom. Let him who has understanding calculate the number of the beast, for it is the number of a man; His number is 666.

Revelation 14:9-11 (NKJV)—9) Then a third angel followed them, saying with a loud voice, “If anyone worships the beast and his image, and receives his mark on his forehead or on his hand, 10) he himself shall also drink of the wine of the wrath of God, which is poured out full strength into the cup of His indignation. He shall be tormented with fire and brimstone in the presence of the holy angels and in the presence of the Lamb. 11) And the smoke of their torment ascends forever and ever; and they have no rest day or night, who worship the beast and his image, and whoever receives the mark of his name.”

The full movie is only 55:58 and it is below this article. I hope you take the time to watch it. It is a great evangelistic film. It is very relevant today.

I have always enjoyed writing little things, poems, devotionals, little short stories and bible studies. I love God and want to glorify His name and I love praising Him. I live in upstate New York with my Chihuahua-Snowball. My children are grown and left me with an empty nest. I have lots of time on my hands and love to fill it with God's Word.
Previous Celebrity vs Authority: Above The Law?
Next Sing A Song! Part I (Praise Delivers)