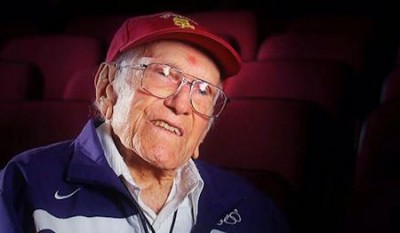 The Story of the Rose Parade’s Louis Zamperini

The life of Louis Zamperini was honored as the Grand Marshall of the 2015 Tournament of Roses Parade. He was chosen in May but passed away on July 2 of pneumonia at the age of 97. “Inspiring Stories” was the theme of the parade, so it was very fitting. His life was inspiring, indeed.

Zamperini’s biography includes being an Olympic Games track star and a prisoner of war in World War II. He survived a plane crash by drifting in an inflatable raft for 47 days before being picked up by the Japanese and imprisoned for two years. His story is chronicled in a best-selling book, “Unbroken,” which was made into a movie currently being shown in theaters.

The movie, however, leaves out the most significant part of his life, his conversion to Christianity, which is not surprising for Hollywood. After he was released from his POW cell and returned to the United States, Zamperini attended a Billy Graham crusade in Los Angeles in 1949. After remaining “unbroken” he said, “I still didn’t like my life after the war.” He started to leave the tent meeting but went back to give his heart to Jesus Christ.

The Billy Graham Evangelistic Association just produced a documentary-style film, “Louis Zamperini:Captured by Grace,” which includes him telling his story in his own words. The movie can be seen online or in DVD form by giving a donation to the association. A trailer is available for viewing at www.billygraham.org/unbroken.

The Bible says in Romans 3:23 that all have been broken by sin and fall short of the glory of God. Achievement, fame, and even overcoming horrible circumstances don’t bring the meaning and purpose to life that God has to offer. Follow the example of Louis Zamperini. Admit you are a sinner in need of God’s forgiveness. No matter how good or bad your life has gone, God’s grace is extended to you. Call upon it today.

Zamperini was a “missing man” in the Rose Parade, but he is now present before God in His eternal kingdom. What a great model of a person with which to begin the new year!

John Livingston Clark is 67 years of age and lives in central Washington State. He has written two published books, and two published poems. His initial book is called, " God's Healing Hope: Breaking the Strongholds of Wrong Thinking." His second book, released in December of 2016, is a motivational book written to seniors titled, " Seniors: Are You Retiring or Recharging?" Both books are available on amazon. You can also view his writings on www.faithwriters.com. John is available to speak on a variety of topics. Visit me at jclarkministries.com
Previous 6 Ways Jesus Taught Men to be MEN
Next Forty Years, Down the Drain