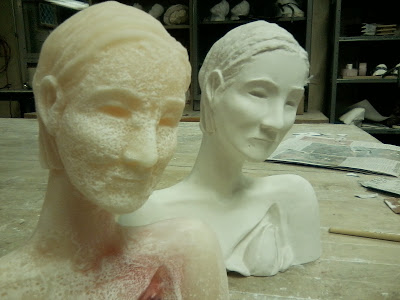 Clay and Wax molds made by Chelsea Litfin

The Voice of Art

It begins deep within the heart of the artist.  There is a whisper, an idea; it stems from the spiritual depth of their being.  It is a voice yearning to be expressed.

Through time and practice, this voice begins to take shape under the hand of the one who is creating it.  Sometimes in the process, the work begins to go a different direction than was originally intended, maybe due to the skill or inexperience of the artist, maybe due to the type of material and its capabilities.

Finally, the piece is finished.  It holds within, the heart of its creator, some attribute of who they are.  There is also a voice, ready to speak to those who view it.

A work has been going on within the viewers as well.  Long before they come into contact with the art, they have been undergoing their own experiences; they possess their own needs and spiritual desires.  What the art says to them, how they perceive it and how it influences them is affected by the spiritual character of this audience.

~From the Heart of the Artist~

Chelsea Litfin, an art major at Emporia State University, has shared the inner workings of her artistic experience on her blog, http://www.eyesfullofwonder.blogspot.com/. “I like to explain about the ideas behind each piece,” she writes.  “What went into the inspiration, what problems I encountered and why certain things change through the process.  That’s what’s exciting about being an artist.”

The picture shown at the top of this page is from one of Chelsea’s projects and she details its creation on her blog.  Her assignment was to create a self-portrait.  As with most of her art project’s, Chelsea chose a scriptural concept to center her work around.  The idea for this piece arose from John 14:23.

Although final result for this assignment was not what Chelsea had expected (the wax mold she made came out porous rather than smooth), she discovered a valuable spiritual lesson from the imperfections, described on her blog.

~The Heart of the Viewers~

This artist of the light has received varying reactions from teachers and peers.  Some teachers have encouraged her Biblically based direction, some have been noncommittal in their response, and at least 1 has tried to coerce her into pursuing more worldly and fleshly themes in her art.  Each group sees the same physical work.  Their response is different as it comes from their heart and spiritual state.

God is a great artist who, out of the depth of his being, created a beautiful world.  Each aspect of creation holds a piece of who God is and bears witness to the character of its creator (Romans 1:20).  Unlike a mindless piece of clay, or an inanimate canvas, as God’s work of art (Isaiah 64:8), we have the choice to allow ourselves to be molded into the character of our Maker, or to resist and become something we were never intended to be.  When we do allow ourselves to undergo the process of being fashioned into a vessel that speaks as God’s witness, we have limited control over the response we will receive from those with whom we come into contact.  Some will see God’s work and be drawn to it.  Others, because of a desire to walk contrary to God’s character, will see His work and be turned off, offended.

“The heavens are telling of the glory of God; And their expanse is declaring the work of His hands.  Day to day pours forth speech, and night to night reveals knowledge.  There is no speech, nor are there words; Their voice is not heard.  Their line has gone out through all the earth, And their utterances to the end of the world.”  Psalm 19:1-4

I was born and raised in the plains of Kansas. After high school, I moved to Omaha, Nebraska where I graduated from Grace University with a Bachelors in Bible and Elementary Education and an endorsement in ESL. A couple of months later, I moved to China and taught ESL at an International school for three years. It was during this time that I became a member of Faithwriters. In 2010, I moved back to the U.S. and taught for one year on the Navajo Reservation. At the end of that year, I moved to Albuquerque where I met and married my husband. I now have beautiful baby girl and work part-time as a writer and a tutor.
Previous The Wedding Gown
Next On the Path