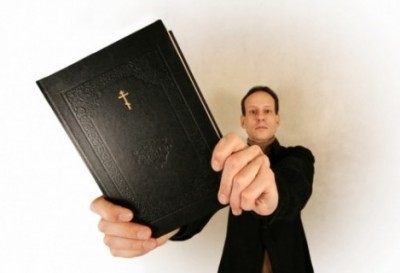 A Pastor’s Loophole for Disregarding the Ten Commandments

God gave us a guidebook to live by. It’s called the Bible. In that guidebook is a list of specific rules called the Ten Commandments. As the name suggests, these are commands expected to be kept by All God’s children. “All Scripture is inspired by God and is useful to teach us what is true and to make us realize what is wrong in our lives. It corrects us when we are wrong and teaches us to do what is right.” (2 Timothy 3:16) But as with any rule in life, when following them becomes inconvenient, some of us start hunting loopholes. We begin to rationalize their effectiveness and meaning, which leads to the manhunt for finding the perfect disclaimer. Baptist minister, Senior Pastor Perry Noble of NewSpring Church, was successful in finding one such loop-hole for not keeping the Ten Commandments.

According to Huffington Post, Pastor Noble said in a sermon, “Instead of Ten Commandments that you have to keep if you’re going to be a follower of Jesus, they’re actually ten promises that you can receive when you say yes to Jesus.” The disclaimer he presented; these commandments are just sayings, not mandatory rules that Christians have to keep. Yet, his only supporting argument was that there is no existing Hebrew word for “commandment.” However, he later confirmed there is a Hebrew word for commandment, and apologized for his error.

Satan remains persistent in getting us to undermine God’s Ten Commandments. He’ll use whomever, be it an atheist or a pastor. Through whatever argument he can find. Example, “The commandments are no longer needed after Jesus’ resurrection.” Or, “Those laws are the old covenant.” But we cannot fall into the trap of buying into those lies. If we do, we’re only compromising our salvation. Additionally, we’ll also be casting doubt on God’s inspired words. “Do not waver, for a person with divided loyalty is as unsettled as a wave of the sea that is blown and tossed by the wind.” (James 1:6) We then become an easy target for the devil’s deception.

Remember, God is not an author of confusion; He will not contradict Himself. John 14:15 says “If you love me, obey my commandments.” God isn’t going to instruct us to obey His commandments out of love for Him, and then make that same instruction, optional. Our Heavenly Father isn’t a deceiver. Thus, He will not allude to the truth but will make it clear, as His words repeatedly demonstrates. Pastor Noble believes his loophole is of God, sent for those struggling to keep the laws—which describes all of us! Keeping the Ten Commandments is no easy task, but John 14:16 continues by adding that God will send us a helper/comforter. He won’t allow us to be tempted beyond our abilities (1 Corinthians 10:13). So, why do men continue to twist Bible truths to suit their needs? Leave a comment.

Amelia Brown is from the beautiful island of Jamaica. She is a 28 year old Guidance Counselor by profession, but a passionate writer at heart. Most of her articles written are aimed at stimulating positive change under the guidance of the Holy Spirit. She is also a published poet and a member of Faithwriters. Outside of writing, she enjoys volunteering, cooking, and turning frowns right side up. Amelia currently lives in New York.
@ameliambrown
Previous The Role of Angels in Spiritual Warfare
Next When Is the Best Time To Be Saved?