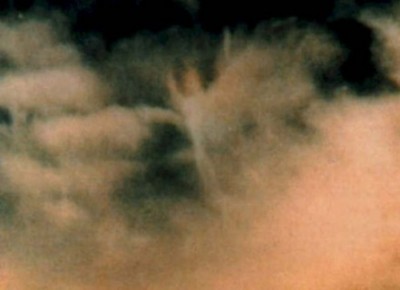 ‘For He will command His angels concerning you to guard you in all your ways. On their hands they will bear you up, lest you strike your foot against a stone.’ Psalm 91:11-12

The picture accompanying this article has a story. And I am going to share it with you.  You can choose to believe, or not to believe, this story. But I assure you, it is true. This really happened, to real people. But, you, as the reader, be the judge.

A friends’ parents, Mr and Mrs J, were celebrating their 50th wedding anniversary. Mrs J had always had a consuming fear of flying, but she had wanted to visit Hawaii for many years. Because of travel concerns, and the need for a plane at some point, she had turned down numerous opportunities to go. But Mr J chose to step out in faith, went to a travel agency, and booked a two week trip to Hawaii. Now, if only he could get her on the plane!

He presented the gift to her at the anniversary gala their children had planned and hosted. While she was overwhelmed at the prospect of finally realizing her dream to visit the beautiful islands, she was equally overwhelmed with fear. She wanted to go, but she was terrified at the prospect of boarding and flying in an airplane. However, after much encouragement from family and friends, and begging by her beloved husband, she consented to the trip.

Now, Mrs J went through with it. She would not sit anywhere near a window, because of her fear. But she was able to fly, and without incident. By the time they arrived in Hawaii, she had mastered the art of pretending to be a ‘normal’ passenger, even though she later admitted to feeling abject terror at every take-off and every landing.

Once in Hawaii, they spent their two weeks enjoying the sights, the smells, the festivities, and just being in one another’s company. They took pictures, and did all the tours. They spent hours wondering around on their own, and more hours on the glorious beaches she had only been able to dream about. It was the perfect anniversary trip.

On the flight home, Mrs J surprised Mr J by asking for the window seat. He, of course, gave it to her, and was amazed when they were airborne and she began taking pictures out of the window. When he asked her what she was capturing out there, so high up in the clouds, she replied that she was taking pictures of those clouds. They were so beautiful, with stunning colors and shapes in them. Mr J was pleased to see his wife of 50 years truly relaxing and enjoying the flight. His stepping out in faith had indeed paid off.

Two weeks after they returned home to, Mrs J took her many rolls of film to be developed. After she received them back, she and Mr J sat and viewed the pictures they had taken. When they came to the pictures Mrs J had taken from the plane’s window, they were shocked at what they saw. There appeared to be a being, in the middle of the clouds she had photographed. As they kept looking, they thought they could see the beginnings of another being in the lower left hand corner. The clouds were indeed colorful and different, but what was in them was even more fascinating. And Mrs J had not seen these beings when she was looking at and taking pictures of the clouds. Both Mr and Mrs J were   convinced that what they were seeing were angels. Mrs J further believed the angels were why she was not afraid to fly on the trip home.

My friend brought me a copy of this picture. I saw the angels too. Then she brought me a negative so I could make copies. I knew this was something I would want to share. I saw it as a ministry tool. And there have been many times that, when people have seen the framed copy of this picture hanging above my desk, I am asked for a copy. And I give it. I will not hold such a treasure to myself. That is not its purpose.

What is interesting to me, is the reactions I get when I show the picture to people. It seems that nearly all Christians see the angels almost immediately. The only people who have not seen them are people who do not believe. I have even pointed out the parts that make up the angel body, but still it is not seen. Why would that be, do you think? Why would God choose to only show this to believers?

It could be to show us that God uses His angels to protect us, to accompany us, to do His service to us. They are always ready to do His will. He has sent them to watch over us. We never know when we may interact with an angel. Just as Abram and Sarah invited two men into their tent, served them, and spoke with them, we also may interact with angels, and not be aware of it. Angels may actually save us from perils in our daily lives. There are times we escape an obvious danger, just by ‘chance’, but perhaps that was orchestrated by angels, in their service to God. Not by chance at all.

Whatever you believe, whatever you take away from this story and this picture, remember: God created the angels to be His servants. They love Him, they worship Him, and they serve Him. They are not to be adored or worshipped by us; only God deserves that. But they should be recognized as the wonderful beings that they are. Servants of our Holy God, created to do His bidding, and to perform works on our behalf. They do not need salvation as we do. We were created to be so much more than the angels.  Just a little higher. But they have their place, and a wonderful place it is.

So what have you decided? Do you believe, or do you think it’s just a nice story? Consider God’s creation. Angels were created by Him. And they serve a purpose. He has put the angels among us. When He reveals them to us, He is reinforcing His promise of protection and care. He is all powerful, and He loves us. What a wonderful God we serve!

‘And to which of the angels has He ever said, ‘Sit at my right hand until I make your enemies a footstool for your feet?’ Are they not all ministering spirits sent out to serve for the sake of those who are to inherit salvation?’ Hebrews 1:13-14

Lili lives in central North Carolina. She writes devotionals and Christian articles and has been published in e-magazines, newsletters, and articles. She is a member of Faithwriters.com. She and her husband Chuck love to travel, and are animal lovers as well. They are active in their local church. Lili credits God for any inspiration that allows her to write. It's all about Him!
@@ohiolili
Previous Walking Together in Agreement
Next Trinity Broadcasting Network: The Vision of Hope