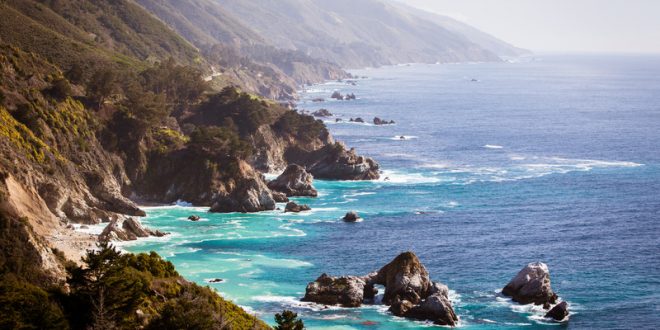 Anxiety or Peace: You Make the Choice!

Nature is a God-given source of peace—when we focus on the right things.

Consider the Golden State of California, with its dessert climate of unique flowering plants such as the bird of paradise—as colorful as a tropical bird and shaped like one as well. Dark mountains rise up around many of its cities, houses dotting the cliffs above the seas. The waters of the Pacific crash into the waiting rocks in colors ranging from navy blue to rich turquois—as though God had taken a paintbrush and painted the waters just so. Sea lions swim close to piers looking for food, or a large rock on which to soak up the sunshine. Fields of golden poppies and scented strawberries add to the beauty of the California landscape. It’s hard not to feel peace when one focuses on such God-given beauty! But if your focus shifts to the negative possibilities, anxiety is sure to follow!

Earthquakes are synonymous with California’s position on the west coast. In March of this year there were 11 recorded earthquakes in San Diego alone,  and San Francisco has 1 or 2 earthquakes every day. Over the course of a year, Southern California experiences around 10,000 earthquakes! Most of these earthquakes are never felt by residents … but there is awareness that a massive earthquake could strike the state of California—as one did on an April morning in 1906 …

Just after 5:13 a.m. on the morning of April 18th, a massive earthquake struck the San Francisco area. The quake was felt in Oregon, Nevada, and even registered in Germany! Over 3,000 people lost their lives on that fateful day.  The possibility of another destructive earthquake is real, and to deny this in exchange for being prepared would have deadly consequences for many.

The state of California is prepared should another disaster occur.  Cities have signs posting tsunami   escape routes in the event that an earthquake produces large waves, and scientists and engineers continually study the effects of earthquakes on buildings and bridges and work to improve the ability of these structures to withstand the movements that occur during a quake.  Large buildings have swayed by a foot during serious quakes with no real damage or injury to those inside due to the efforts put forth by these professionals. Escape plans are in place and most Californians know what to do should the earth begin to shake!

But practical steps for dealing with anxiety and being prepared while still focusing on the positive are important not only in the practical areas of life, but also in the spiritual—the eternal:

A prudent man foresees the difficulties ahead and prepares for them; the simpleton goes blindly on and suffers the consequences. Proverbs 22:3

Throughout the Bible, God Himself promises that He will care for those who trust in Him, while also instructing us to being prepared for what may come. And most importantly, He prepares us for eternity by instructing us in His plan for salvation. Focusing on the positive is not denial of the truth or choosing fear over preparing, it is putting our trust in God to do what we cannot.

Keep your eyes on Jesus, our leader and instructor. He was willing to die a shameful death on the cross because of the joy he knew would be his afterwards; and now he sits in the place of honor by the throne of God. Hebrews 12:2

We all experience anxiety from time to time, but God’s desire for us is to have peace as we trust in Him. Jesus left us His peace when He returned to the Father, it is ours to receive. Consider the trials you are currently facing: What can you do to experience God’s peace today? Where will you look answers to the anxieties of life?

My husband Dan and I have three children and three grandchildren. We live in central Illinois. I am a graduate of The Institute of Children's Literature, a member of faithwriters.com, and a member of SCBWI. My writings have been published at chirstiandevotions.us, in DevotionMagazine, the PrairieWind Newsletter, and here at thebottomline.co.
Previous The Christian’s Guide to Voting for the Right Candidate
Next Having Hope and Security in a Shaken Up World