Breaking News
Home / Faith / Changing “What if…” Into “So What!” Part II 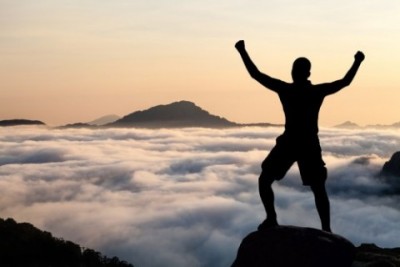 Having gained some confidence from surviving the high ropes course, the zip line, and rappelling the high tower at camp, I decided the following semester to enroll in a class to help reduce the stress of school.  Knowing that my terror for heights still lingered, I wanted to try and face my fear and look it square in the eye, so I decided to take a rock-climbing course.   How bad could it really be since all we had to do was climb the 2×4 30’ wall in the UNI dome.  But my fears cried out: “What if I fall and break my neck?”  “What if my hands become too sweaty and I can no longer hold on?”  “What if I become the only one who cannot climb thirty feet off the ground?”    I knew I could not continue to dwell on “What if”, so I moved into “So what…!”  “So what if I do break a body part.  Maybe I could have a medical reason to take a break from school work or work in general.”  “So what if I don’t actually finish the climb, at least I tried.”  The debate continued in my head until the first day of class.

Entering in to the rec center, I took a seat amongst a sea of guys and fished my eyes around to find at least one other girl who would be in this journey with me.  Finally, I caught hold of four other girls who seemed to be up for the same challenge.

I loved the course from day one. I learned how to tie knots, the importance of new equipment, safety checks, how to belay, and many other crucial components of rock climbing.  My professor had been rock climbing for years, and is known around the nation as a lead climber, so I knew I was in good hands until he explained our required final.  We would be climbing at a nearby state park, which was about an hour away. The climb would require upper body strength, endurance, and our best mental focus.  The ultimate match of fear and potential failure was now on and there was no backing down.

Days counted down into a beautiful spring Friday; the day of our final and the last day of the semester.  Each student drove separately to the park, and my future husband came along with me to make a day of the park and I believe to see for himself if I really could accomplish the task at hand especially being the one who pushed me down the zip line to begin with in order to overcome my fear.

For once in my life, I was actually early for my slotted climbing time.  I began to strap on my harness, belt up my gear, and lock in my line.  The emotions pulsating through my body are so hard to explain. The only comparison I can make is imagine what would happen if jello was to go through all three phases of matter (solid, liquid, gas) all within a moments time.  I was solid.  So pumped to know that I had been preparing all semester for this one day.  I was a liquid. My palms were sweating so profusely I didn’t think there would be enough talc powder to protect my hands.  I was a gas.  I had vaporized my negative thoughts in order to keep pursuing my goal.

Geared up and waiting, I focused in on the climb.  The highest peak stopped at roughly 150 feet which does not seem much, but for a first time climber, especially one who is afraid of heights, that seemed like an astronomical number.  Five minutes later, my belayer was ready and the conversation began.

“Ready to climb.”  I couldn’t believe I was actually going to do this.

“Climb on.”  I moved forward bouldering the initial part of the climb as the slack in my line cinched tighter which I felt most confortable with; a tight line meaning my belayer was working just as hard as I was staying focused.  Fifty feet into the climb and I was feeling good.  My grips were holding, the rope tension was perfect, and I was able to see the top.

Coming upon the 100-foot mark and an hour into the climb, I was pumped yet my arms were exerting exhaustion.  It was this point that my professor had forgotten to mention earlier that in order to proceed to the top, you have to let go, push yourself out from the landing, and free jump roughly 7 feet across to the middle landing.  My initial thoughts: Well, that’s not going to happen.  What really came out of my mouth was me yelling,

“Why did I even sign up for this class in the first place?  What on earth was I thinking?  I must have been crazy.”  As all of my fears are spilling out of my mouth, I looked down for a moment and see both my fiancé and my professor laughing hysterically at me,  I on the other hand, did not see the humor in this situation.  I only saw FEAR!  Yet, this fear needed to be defeated or at least somewhat contained, so I decided after twenty minutes of panic, being petrified, and a bit perturbed about the whole scenario, I was going to do it.  I was going to be the only one to make it to the top.  I did not want to be like those before me who had come so far to achieving their goal, yet backed out at the last minute because of those four letters.

Letting go was the hardest part to overcome.  I was comfortable clinging to the rock hold.  I felt accomplished by what I had done up unto that point.  The climb had been a success. Except, it wouldn’t be a success in my eyes if I didn’t finish what I came out to do.  The moment I let go of the rock, my security, my safety net, I let go of the “What if’s”.  Yes, they were still specks of thoughts in my mind, but I cared more about finishing the climb than failing by not reaching the height I wanted to achieve.  My attitude became “So what if I get hurt?  At least I was moving forward.”

After I had taken the jump, I made it to the top, but in the meantime, I cut my leg up pretty bad.  Yet, I was too busy pushing forward to even notice the pain until it was all said and done. To this day, I still have the scar to remind me of what I once thought impossible and how it became possible when I let go.

“For I can do all things through Christ who strengthens me” (Philippians 4:13)

Here’s one last food for thought.  I have two aunts who prayed mightily for a family member to break their traditional religion and come to know a personal relationship with Jesus Christ.  For years they prayed, and I was the one who answered the call.  What if I had told God no that night when I gave myself to Christ?  What if I had said, I’m too afraid to say yes because if I do, my marriage could end.   My parents could disown me.   I could be lonely and my life could change drastically.

Instead, I chose to say “So what!”  “So what if my marriage ends in divorce.  I get to be with the King of all Kings for all eternity.”  “So what if my parents don’t ever talk to me again?  After all, God is my true father who I must be obedient to.”  “So what if I become lonely in the eyes of others.  I now have Jesus to keep me company.”

Is God calling you today to let go of your fear, and step out in faith knowing that He will catch you when you fall?

“Be strong and of good courage. Do not fear nor be afraid of them; for the Lord your God, He is the One who goes with you.  He will not leave you nor forsake you.” (Deuteronomy 31:6)  Trust him as you chose to venture from “What if…” into “So what!”

is an author and editor for The Bottom Line Ministries as well as a member of Faith Writers. Currently she teaches high school language arts. She is a mom to four amazing blessings and enjoys every moment life has to offer. Renee has a fervor and drive to learn, she loves to read and spend time with her family, and is involved with her local church ministries. Humbled by God’s gift of words, she has a passion to write what the Holy Spirit has placed in her heart. She hopes to publish her in-progress book someday, but in the meantime, is honored to be placed as part of the TBL writing family and is holding on to the ride wherever God is leading. Renee and her family reside in their country home in Holland, Iowa.
Previous God wants Relationship
Next Are You in the Lamb’s Book of Life?