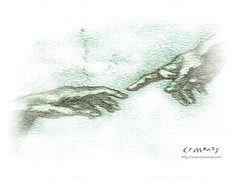 “Even as [in His love] He chose us [actually picked us out for Himself as His own] in Christ before the foundation of the world, that we should be holy” (Ephesians 1:4a Amplified).

Some of you guys may know what it’s like to get picked last—especially when two sides are chosen for a game of softball, for instance. Perhaps you had pity on the scrawny kid who stood all alone after everyone else had been spoken for. Or, maybe you are that lonely unselected individual. What a sucker punch to the already queasy gut! It would help if the coaches made a new rule. “Hey, you hotshots, pick the weaklings first!” No doubt about it, that’s not happening. You know why? We want to win all the marbles—it’s in our worldly DNA. Let’s consider a bigger picture.

Look for a moment, if you will, at another showdown. Gethsemane. Rather, way before the Garden of Gethsemane. Another garden called Eden. Scripture tells us in Genesis 3:15, God cursed the serpent and promised One to come who would bruise his head. Put another way, the devil loses. Sure enough, God’s promise prevailed and Satan met defeat on resurrection morning when Jesus arose from the dead. We call it Easter and here’s the backstory.

Before the foundation of the world we were chosen in Him and the Lamb of God was already slain for you and me (Rev 13:8). How brilliantly orchestrated is that? It’s simply this—Jesus’ life and death made a way for full payment of our wrongdoings and by recognizing ourselves as sinners the door opens for us to express faith in Christ; if we so choose. You notice, we owed a debt we could not pay and He paid a debt He did not owe. Because of His sacrifice, we are forgiven, reconciled and adopted into our Father’s family including heaven as our eternal home. Treasured. Accepted. Chosen. Beloved. Let that marinate a while. Almost too luxurious to ingest, isn’t it?

To be clear; underdogs, ne’er-do-wells, throwaways, un-lovelies, ragamuffins and bums are chosen and given a new nature all because of God’s immeasurable love “Before I formed you in the womb I knew you; before you were born I sanctified you” (Jeremiah 1:5 NKJV).

Oh, Father, grant us wisdom to understand your great design. May we be overtaken by Holy love chasing like a flaming fireball (Acts 2:3).

Darlene enjoys farm life in rural southern Georgia USA
Previous OUR HOPE: The Power of The Tongue
Next If I am Divorced am I Disqualified?