Breaking News
Home / Faith / Do You Pursue God or Religion? 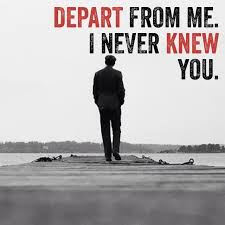 Do You Pursue God or Religion?

“As has just been said: ‘Today, if you hear his voice, do not harden your hearts as you did in the rebellion.’  Who were they who heard and rebelled? Were they not all those Moses led out of Egypt? And with whom was he angry for forty years? Was it not with those who sinned, whose bodies perished in the wilderness?And to whom did God swear that they would never enter his rest if not to those who disobeyed? So we see that they were not able to enter, because of their unbelief.”  Hebrews 3:15-19 (NIV)

God sent Moses to free the Israelites, who were enslaved in Egypt, and to lead them to a “land flowing with milk and honey,” which is a picture of God’s provision in abundance.  When they finally came to this place, Canaan, the Israelites refused to enter, frightened of the indigenous people which included giants, even though they knew people lived there, because it is said many times throughout the book of Numbers.

When they finally reached the border of Canaan, Israel sent out spies, two of which returned and said, “We can do it,” and ten which returned and said, “They will kill us.”  The Israelites decided they would rather choose a new leader and go back to slavery.  God was angry because of their unbelief and declared they would not enter the Promised Land, but instead would wander in the wilderness until all the people
20 years of age and older died.

The Israelites knew God was able to conquer the people, just like He drowned the Egyptians, nevertheless, they chose fear over faith and paid the price.  They followed God in the pillar of cloud by day and the pillar of fire by night for 40 years in the desert, but, in the end, were not allowed to enter the Promised Land (Heaven) because of their unbelief.  This is a shadow of those who will not enter Heaven even though they “followed” Christ all their lives.

Here is what Jesus said about this:

Here is The Message version:

“Knowing the correct password—saying ‘Master, Master,’ for instance—isn’t going to get you anywhere with me. What is required is serious obedience—doing what my Father wills. I can see it now—at the Final Judgment thousands strutting up to me and saying, ‘Master, we preached the Message, we bashed the demons, our God-sponsored projects had everyone talking.’ And do you know what I am going to say? ‘You missed the boat. All you did was use me to make yourselves important. You don’t impress me one bit. You’re out of here.’”
(emphasis mine)