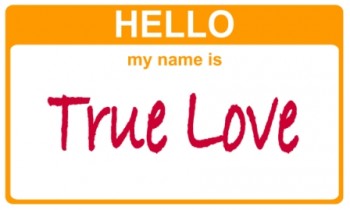 We all love a fairy tale ending. We love a good mystery where the villain isn’t revealed until the end. A great epic will captivate us to see if our hero’s bravery will win out. True love is not a fairy tale. It is not a mystery unrevealed, nor is it an epic tale where the outcome is in doubt.

In our lives, we all have found that love isn’t perfect and there isn’t always a “happily ever after.” We know mortal life is not that way and we dream of a world where love is perfect and it lasts forever. Many would say true love only exists in fairy tales and they have given up on dreaming of it. Some live in a dream world and still believe fairy tales can come true. Many have experienced what man calls love as hateful, cruel, manipulative and mean. Can true, lasting love still be found? Where can we find it?

Paul argues love is an action, not an emotion. He says it must be experienced, seen and demonstrated. This is the opposite of our American culture that relies totally on feelings, emotions and attractions. Man, by his nature, does what he “feels” is right.

“To prove his love for her, he swam the deepest river, crossed the widest desert and climbed the highest mountain. She divorced him. He was never home.”  [Rose Sands: The Saturday Evening Post]

Many have deduced from Paul’s writing that true love is only a behavior. Love is all those things Paul said, but it is far much more.

Love is not a three letter word: Sex! Love is not even a word, for it cannot be adequately expressed only there. Love is more than just a feeling, but shown without feeling and emotion–what good is it? It falls short if only shown in actions. Love is a commitment but it is much more than even that. It is a vow made and a vow kept.

Love is pure devotion seen in a perfect hatred for everything else. Love is something we spend a lifetime seeking and understanding more of as we experience it. Love is of God. Love is God. You cannot know love apart from God. It is shown us in His wrath. It is found in our condemnation, our guilt and our shame. It is searched for in our repentance.

Love results in our forgiveness and redemption. Love was perfectly manifested in Christ’s sacrifice. Love is only found in a “just” God, in a jealous God and in the righteousness of God.

Love is a seed planted. It is meant to grow in love. It cannot grow without His love. Love not grown is love not shown. If love is not growing, the seed of faith was never sown in us. Love is growing in His love, growing in our knowing His love, and results in our sowing that same seed of love in others out of His love sown in us.

Love is a mystery forever revealed in who God is, and He is love. True love is not found in us loving God or us loving others. It is only found in God loving us and loving others through us. Without God’s love, there is no love.

So the question is—how well do we die to our own desires and sacrifice for those we say that we love?

Are you seeking God’s true love or just a fairy tale of His love?

True Love is not a fairy tale … a mystery not revealed … or waiting for the selection by men
It is not for later or when … or we shall see … then leaving us asking God where have you been
Our fate is sealed in a promise … a down payment has been given … it is God’s “Yes, and Amen”!

I am a layperson with 35 yrs. of teaching Sunday School, bible studies, and preaching on occasion. I teach a bible study in a local prison. I am a 36 yr. counselor/social worker. I am disabled and have devoted the past four years to studying, praying, and writing about my greatest love; this gospel of Jesus Christ that has the power to save a man's soul. I also write devotions for a Church in Marion, VA and I write for an orphanage/ministry in Zambia, Africa.
Previous Do You Pursue God or Religion?
Next How to Influence Your Kids’ Behavior