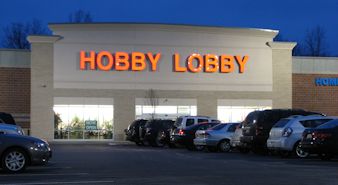 While Hobby Lobby is awaiting the outcome of their case before the U.S. Supreme Court, president Steve Green is promoting a public school Bible curriculum that has been developed by the Green family’s Green Scholar Initiative. It has already been approved by the Mustang, Oklahoma school board. The curriculum went through ten rounds of scrutiny and editing by 70 scholars of various faiths. A goal is to have 100 high schools adopt it by September of 2016.

Steve Green has always been interested in Bible related projects, the latest being the Museum of the Bible due to open in 2017 in Washington D.C., of which he is the president of the board. The Green family has also collected over 40,000 biblical texts and artifacts, which will be on display in the museum.

In the context of all of the controversy with any kind of religious expression in our public schools, it is legal to teach such a course as long as it is an “objectively academic study of the Bible’s role in history.” In 1963 when the Supreme Court banned school-sanctioned prayer it found no problem with an elective Bible course “when presented objectively as part of a secular program of education.” It was ruled consistent with the First Amendment. Not only is it legal, but it makes sense to include it as part of a school curriculum. After all, it is the most read book through all of history. This would go along with what Bill O’Reilly said about teaching our kids about Jesus because he is the most famous person who ever lived.

A key issue is, as always, if the students want it and choose it as an elective, it falls under their rights of free religious expression. So far 170 students in Mustang, Oklahoma have already pre-registered for the classes. The course will be taught from the standpoint of the Bible’s role in the history of our nation, and bring in elements of archaeology, history, and how it has impacted society.

If this Bible course is implemented on a widespread basis along with the resurgence of Bible clubs and other forms of religious involvement by students, maybe we could witness a new spiritual and moral renaissance among the generation of kids in our public schools.

John Livingston Clark is 67 years of age and lives in central Washington State. He has written two published books, and two published poems. His initial book is called, " God's Healing Hope: Breaking the Strongholds of Wrong Thinking." His second book, released in December of 2016, is a motivational book written to seniors titled, " Seniors: Are You Retiring or Recharging?" Both books are available on amazon. You can also view his writings on www.faithwriters.com. John is available to speak on a variety of topics. Visit me at jclarkministries.com
Previous Failed Feet Makes Weak Stronger
Next Dealing with Needs: Stepping Out in Faith