Breaking News
Home / Faith / How Does God Define a Fool? 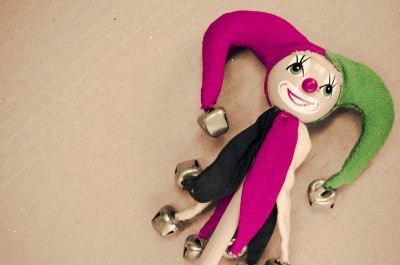 How Does God Define a Fool?

The fool, or jester, of medieval times was an interesting character. He spent his life entertaining noblemen and kings. He had a great wit and humor about him, which he needed in order to wear his garishly colored garments and his “fool’s” hat with its jingling bells. But perhaps his sense of humor was most needed in order to carry his imitation scepter made of animal bladder! He would sit in the court of his king and say whatever came into his head in order to entertain the king and his subjects. Before his undeniable sense of humor was discovered, he had a variety of occupations. Some fools were even former monks who had lost their piety by behaving in questionable manner toward nuns. Yes, the fool of old was quite the character!

Finding humor in the foolish behavior of  court jesters was easy, and needed by men in authority in times past to lessen their load.  But there is another type of fool talked about in the Bible who is to be pitied. The book of Proverbs mentions this fool over 60 times, starting in the first chapter of the book. Yet when we think of this biblical fool, we often see the individual much as the fool of the king’s court: silly, boisterous, impetuous, attention grabbing. We do not realize, until we look deeper into God’s Word,  just who this fool really is:

“The [reverent] fear of the Lord [that is, worshiping Him and regarding Him as truly awesome] is the beginning and the preeminent part of knowledge [its starting point and its essence]; But arrogant fools despise [skillful and godly] wisdom and instruction and self-discipline.”  Proverbs 1:7

In Proverbs 1:7, the Hebrew word for fool is eviyl which translated means flippant, coarse, callous, mentally dull and arrogant. This individual will have great difficulty with fear of the Lord. Receiving instruction from others is usually met with a wall of arrogance instead of humility, and self-discipline is too costly to consider for the mind that simply wants to live for today.

There is another kind of fool mentioned in  the first chapter of Proverbs:

“How long, O naive ones [you who are easily misled], will you love being simple-minded and undiscerning? How long will scoffers [who ridicule and deride] delight in scoffing. How long will fools [who obstinately mock truth] hate knowledge?” Proverbs 1:22
“For the turning away of the naive will kill them, and the careless ease of [self-righteous] fools will destroy them.” Proverbs 1:32

In verses 22 and 32, the Hebrew word for fool is kesiyl which translated means a stubborn, closed, and dull mind. This individual loves to keep it simple! Knowledge is actually hated—why spend time learning? For this person, the truth carries little if any importance. In the end, their desire for ease and their inability to discern destruction will lead to their demise.

There is no humor in the ways of the fool described in the book of Proverbs.  Unless this individual turns from their own ways, God warns that destruction will follow.  How can the fool avoid this path? It is by the reverential fear of the Lord, knowledge of His ways, love of truth, and self-discipline. These are all signs of wisdom—a word mentioned over 200 times in the Bible!

Do you desire wisdom from God? How will you seek His wise counsel in your life?

My husband Dan and I have three children and three grandchildren. We live in central Illinois. I am a graduate of The Institute of Children's Literature, a member of faithwriters.com, and a member of SCBWI. My writings have been published at chirstiandevotions.us, in DevotionMagazine, the PrairieWind Newsletter, and here at thebottomline.co.
Previous Flowers Are Not Enough, How Not to Fear in the Face of Terroism
Next Our Hope: Jesus Is Our Hope!