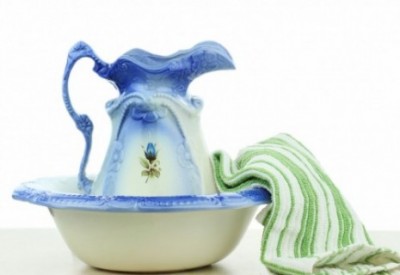 Humility And Scrubbing The Stinky Feet

Taking off my two-year old’s shoes, I jokingly proclaimed to my son. “Whooo! P.U!” “Your shoes smell awful!” With his brilliant blue eyes and giggled response, I knew he was enjoying the game, but in all reality, I questioned the possibility of someone so small creating such a putrid and emanating smell.

The quick version of entertainment caused me to reflect upon something greater, the evening that Jesus washes the feet of his closest friends.”

During the supper, he got up from his seat “and laid aside His garments, took a towel and girded Himself. After that, He poured water into a basin and began to wash the disciples’ feet, and to wipe them with the towel with which He was girded. “ (John 13: 4-5)

Okay, timeout. In order to gain a better picture of the seriousness to the situation you need to understand a little history behind having your feet washed. To begin with, the job of being a feet washer is meant for a servant not for someone of a higher authority. Yet, Jesus goes to great lengths to show that he is not just going through the motions and portraying the image of being a servant, but he completes all of the steps a servant would do in preparation for the task at hand.

He rises up during supper, lays aside his garments, takes a towel and girds it around himself. Next, he pours water into the basin and proceeds to not just quickly wipe off their feet with a damp cloth. (Guzik)

Moreover, their feet were far from being clean. Keep in mind not only living conditions but how far and wide people would walk. I guess I shouldn’t complain when my toddler’s feet are just a bit raunchy in odor. Scrubbing out as much permadirt from the disciple’s feet symbolized more than a simple foot washing. It was far beyond their comprehension at the time.

“According to the Jewish laws and traditions regarding the relationship between a teacher and his disciples, a teacher had no right to demand or expect that his disciples would wash his feet. How much more unthinkable was it that the Master would wash His disciple’s feet?” (Guzik)

Jesus made everlasting impacts during his brief ministry on earth. Washing his disciples’ feet was an action that needed no words. He chose to humble himself before all of those who were considered to be lower than he, yet that was his specific intention. To leave a direct in your face message; you are no greater than anyone else.

The image of God washing, by choice, the feet of his friends, is both overwhelming and sobering at the same time. Who would do such a dirty job? Only those who are willing to recognize the importance of humility, sacrifice, and love.

What obstacles stand in the way before you and God? Pride? Selfishness? Control?  Will you allow Jesus to wash not just your feet but your heart as well?

is an author and editor for The Bottom Line Ministries as well as a member of Faith Writers. Currently she teaches high school language arts. She is a mom to four amazing blessings and enjoys every moment life has to offer. Renee has a fervor and drive to learn, she loves to read and spend time with her family, and is involved with her local church ministries. Humbled by God’s gift of words, she has a passion to write what the Holy Spirit has placed in her heart. She hopes to publish her in-progress book someday, but in the meantime, is honored to be placed as part of the TBL writing family and is holding on to the ride wherever God is leading. Renee and her family reside in their country home in Holland, Iowa.
Previous Will You Be Ready When Mr. Rainy Day Stops By?
Next Three Tips for Digging Deeper into God’s Word