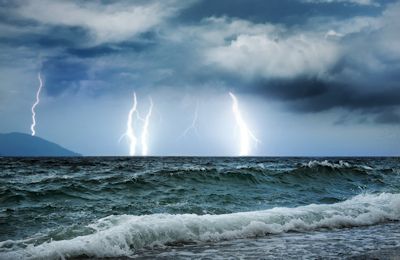 It’s All Fun And Games Till It Starts To Rain

It is not known exactly how long it took for Noah and his family to build the ark. Some use Genesis 6:3 to suggest it took 120 years, however that is the maximum amount of time it could have taken, and it could have certainly taken a lot less time. What we do know is that 120 years was the amount of time given after God commanded Noah to build the ark until the skies and the fountains of the deep opened up (Gen 7:11).

Genesis doesn’t say a whole lot about the condition of the world, except that the imaginations and thoughts of man’s heart was continually evil (Genesis 6:5). The Book of Matthew picks up where Genesis left off and states the following:

So picture the scene, Noah and his family are building this huge ark because he knows man is about to be destroyed. There were probably many scoffers wondering why he was doing such a thing and not busy partying with them. Noah, of course, was a steadfast and righteous man, and he continues building the ark. He gets into the ark with his family, then the door shuts, and here comes the water. Suddenly the partying scoffers realize they’re in trouble, but it’s too late. The end comes for them!

Isn’t this the attitude of many in today’s world? The Matt 24:37-39 scripture tells us that the coming of man will be similar situation. People will be preoccupied and then…WOOSH…comes their demise!

There is hope! There are many faithful Christians out there trying to warn others of such an outcome, and pleading with the lost to come to the knowledge and saving grace that is found in Jesus Christ. We do, however, experience certain roadblocks like the secular media claiming Christians are intolerant. If someone is trying to hand you a lifejacket when you are drowning, that does not make them intolerant, that makes them a lifesaver!

Friends, I want to end this making sure every Christian understands the true meaning of the rainbow. It’s not what we typically hear about on the news. It’s actually a covenant by God. It’s a ceasefire, or a symbol of grace, that God will never again flood the earth (Gen 9:12-17). It’s important that we understand this, because rainbows are a result of light mixed with rain, which are both symbols of purity, and each time we see a rainbow in its magnificence we should be reminded by the importance of living pure lives and what failing to heed this warning once did to the entire earth. Thank you for reading and God bless.

Joel M. Bauer is a 45-year-old U.S. Army Veteran from Dunn, NC, which is just outside of Raleigh. After being honorably discharged from the U.S. Army, he attended school at Taylor University, a Christian liberal arts school, in Fort Wayne, IN, where he received his BS in social work and psychology. He has worked in such places as a homeless shelter, a community based treatment center for severe mental illnesses, a school for troubled students, and other social service agencies. His current endeavor is to build The Bottom Line website into a site that inspires both Christians and non-Christians alike, and brings glory to God.
Previous Outbreak: Considering the Treatment of a Deadly Virus and the Responsibility of Leaders
Next There is Nothing Hidden…