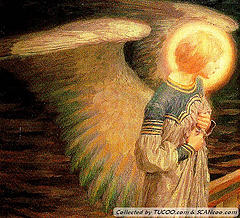 At the most pivotal moment in history, God deliberately interjected activity between celestial realms and our domain. He did this by choosing to involve lowly shepherds with Jesus’ birth. What’s that about? After all, they were just tending flocks soon to be slaughtered for temple sacrifices. Probably unskilled, disrespected and certainly not prestigious. Apparently, it’s a smelly job, but somebody has to do it. Right? With that stacked against the sheepmen, one wonders why God invited them to the greatest show on earth. And, what began a routine night-shift, turned miraculous. Blending heaven and earth, a messenger-agent heralded good news of a Savior. At long last, the King of Kings arrived (Luke 2).

Although God permitted Bethlehem’s Lamb to be seen by poor peasants, it’s not the first time He merged a Holy purpose with clay vessels. In fact, He intentionally interfered with Abraham’s life by calling him to unchartered territory. In the beginning, He formed Adam from dirt and walked Enoch through the Milky Way. Omnipotence dislocated Jacob’s hip, renamed him Israel, and sent angelic beings. Ethereal seraphim, ascending and descending golden stairs that linked land and sky (Genesis 28:12). There’s more: Noah, Moses, Gideon, Elijah, Daniel etc., Throughout the Bible, men and women were selected as conduits, manifesting Gods’ directives.

Of course, Gods’ acts are supernatural and He always takes the initiative. Inevitably, He does this on His timetable, not ours. I’m moved to think about how God extended salvation beyond the Jewish nation by grafting (in) Gentiles (Romans 11:19). Subsequently, to accomplish this, He needed a man. Enter Saul [Paul]. However, Saul had ambitions of his own. Thankfully though, a blinding Light (risen Christ) intercepted him and rearranged his entire life. Talk about a real game-changer.

While Genesis flings wide new beginnings, Revelation presents the ending. With these writings, God desired to finalize His divine program of redemption and vindicate His holy name before all creation. To pull this off, He incorporated one of the twelve—John. The Revelator unveiled what otherwise would have remained hidden. Featuring several high moments of worship, residents of glory and saints of God intercommunicate.

In closing, I realize most of this is way over my head and bordering on things ‘too lofty, great matters too wonderful for me to understand’ (Psalm 131:1). So, in the words of Charles H. Spurgeon, “Tis when we taste Thy love, our joys divinely grow, unspeakable like those above, and heaven begins below”. Can’t top that!

“No eye has seen, no ear has heard, and no mind has imagined what God has prepared for those who love him” (1 Cor 2:9 NLT).

Darlene enjoys farm life in rural southern Georgia USA
Previous Suing for Tuition — What’s Next?
Next The Underside Of Writing