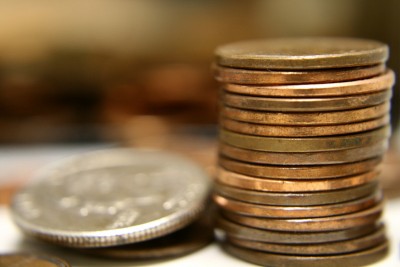 “The kingdom of heaven is like a [very precious] treasure hidden in a field, which a man found and hid again; then in his joy he goes and sells all he has and buys that field [securing the treasure for himself]. Matthew 13:44

The record book is old and faded, the pages yellowed. But the hand written expenditures within those pages are as clear as when they were added over fifty years ago:

If only those prices, for a family of 6,  were valid today! The state of Florida wouldn’t have enough space to lodge everyone coming to enjoy its sunshine …

Money is an important part of life, and having a budget to live by as well as keeping record of expenses so that you can look back and see where your money was spent, is wise. But a wise individual understands that it should never be the treasure of our life, to be attained at any cost.

There is another treasure which cannot be seen by the eye of man, but it is the most valuable treasure of all … the Kingdom of God. It was so worth attaining and keeping, that the man in Matthew 13 sold everything else he owned in order to have it for himself. We do not know anything else about this unnamed man … Perhaps he was wealthy in his community, enjoying power and privilege due to his financial influence. Or perhaps he had little in worldly possessions, valuing what little he had worked so hard to attain. Perhaps he had inherited beautiful treasures, vast land, or a fine estate simply by virtue of who he was to his family. Whatever his situation, he was more than willing to sell  all to attain the treasure in his newly gained field.

We do not know anything more about what this treasure was than we know about its new owner. We only know that it was worth everything to the man.  But we do have the privilege of understanding what the treasure of God’s Kingdom holds for us:

The angel held in his hand a golden measuring stick to measure the city and its gates and walls.  When he measured it, he found it was a square as wide as it was long; in fact it was in the form of a cube, for its height was exactly the same as its other dimensions—1,500 miles each way.  Then he measured the thickness of the walls and found them to be 216 feet across (the angel called out these measurements to me, using standard units).

The city itself was pure, transparent gold like glass! The wall was made of jasper, and was built on twelve layers of foundation stones inlaid with gems: the first layer with jasper; the second with sapphire; the third with chalcedony; the fourth with emerald; the fifth with sardonyx; the sixth layer with sardus; the seventh with chrysolite; the eighth with beryl; the ninth with topaz; the tenth with chrysoprase; the eleventh with jacinth; the twelfth with amethyst.

The twelve gates were made of pearls—each gate from a single pearl! And the main street was pure, transparent gold, like glass.

No temple could be seen in the city, for the Lord God Almighty and the Lamb are worshiped in it everywhere. And the city has no need of sun or moon to light it, for the glory of God and of the Lamb illuminate it.     Revelation 21: 14-23

It’s been said that truly understanding the Kingdom of Heaven is beyond the human mind. Its beauty and majesty surpasses anything we may see as a treasure here on earth. And the most wonderful truth of all is that there is room for all of us there! It is our own choosing that determines whether we want to be with God in heaven when our life on earth ends. To keep this truth in our mind and heart as we live in this world so fixed on wealth, power,  and fame is the wisest choice we can make!

After considering Revelation’s description of heaven, will you view the treasures this world offers through new eyes? Will you choose all that God has prepared for you over what you can attain temporarily here on earth? We’d like to pray for you if you have questions about salvation … please leave a prayer request for us!

My husband Dan and I have three children and three grandchildren. We live in central Illinois. I am a graduate of The Institute of Children's Literature, a member of faithwriters.com, and a member of SCBWI. My writings have been published at chirstiandevotions.us, in DevotionMagazine, the PrairieWind Newsletter, and here at thebottomline.co.
Previous “Take this cup from me”–When God Says No
Next Jesus-The Preacher