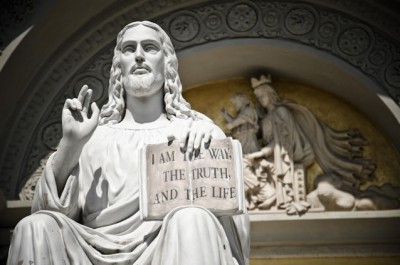 Most people perceive Jesus as a meek, gentle preacher of the gospel in ancient Israel. But this is simply not true. He was passionate about preaching the Kingdom of God to all creation. He brought a new message to the world that the Kingdom of God was alive and well. It was no longer a distant concept that people would only experience in the heavenly realm. No! it was at hand and it was in your backyard. You believe in Jesus and His message then the Kingdom would dwell right inside of you.

I doubt Jesus  sat quietly in the synagogue and whispered the wisdom and truths of God’s kingdom. Do you? He said in Matthew 10:27:

What I tell you in the dark, speak in the daylight; what is whispered in your ear, proclaim from the roofs.

Jesus is telling us here to shout, what He tells us in the dark, on the rooftops. He doesn’t say to whisper it in our closet but SHOUT it from the rooftops. He made the message known throughout the cities and villages of Israel. He was highly visible preaching the good news everywhere He went.  Signs and wonders followed His message and He performed these miracles in front of the multitudes. There was nothing hidden about His message.

Remember when Jesus raised Lazarus from the dead?

Now the crowd that was with him when he called Lazarus from the tomb and raised him from the dead continued to spread the word. John 12:17

It’s recorded Jesus called Lazarus from the dead; He didn’t whisper his name.  He shouted his name and commanded his life to be restored. Jesus also drove out the moneychangers from the temple. He formed a cord and drove them out of His Father’s temple. He later said you have turned my Father’s house into a den of robbers. He wasn’t talking quietly either He was shouting. So scripture clearly records for us that Jesus was a passionate preacher who loudly and clearly preached the gospel so that all could clearly and easily understand it.

How can you prove from scripture Jesus was a passionate preacher?

Greg is a born again believer who testifies to the absolute transforming power of God's word. Greg has been called to full time ministry and He has known Jesus for most of his life. Greg received his degree in Pastoral Ministries from what was formerly Bethany University in Santa Cruz,California. View Greg blogs on iwriteforjesus.com. Greg has a book published on " To Jesus Christ the High Priest of my confession: A personal Testimony." find it on http://www.amazon.com/Christ-Priest-Confession-Personal-Testimony/dp/1507706847/ His testimony in short form is published in "Trials and Triumphs II" on http://www.amazon.com/Trials-Triumphs-II-FaithWriters/dp/1498416012/. This book is filled with 50 inspirational testimonies and is a project of Faith Writers.
Previous Real and Precious Treasure
Next Employees Shine Jesus’ Light On Grieving Drive-Thru Customer