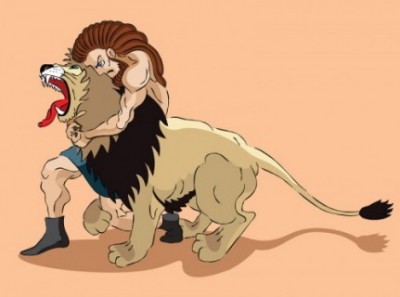 He was the son of an Israelite, and a handsome fella. Though he was favored with extraordinary physical strength, he was rendered weak to a woman’s charm.  His strength and physique paired with his stubborn nature, had a way of getting him results. This man was dedicated to God from the womb (Judges 13:5). Nevertheless, he was driven by passion and self-indulgence seemed to be his playing field. Samson, the Philistines’ worst nightmare, needs no introduction.

Samson is a well know Bible character. He’s known for his strength and his affairs with Delilah. However, the aspect of his life that’s often neglected is how he died. After losing his strength, he prayed for God to return it. He then used this gift to demolish the building hosting a large crowd of Philistines; killing everyone including himself.

Was his action a sacrifice or suicide?

It’s clear that his motive for requesting the renewal of his strength was for personal revenge, and not to deliver Israel from the Philistines. That’s not disputable. “Then Samson prayed to the LORD, Sovereign LORD, remember me. Please, God, strengthen me just once more, and let me with one blow get revenge on the Philistines for my two eyes” (Judges 16:28). Interestingly, his strength was restored—regardless of his intentions.

“Dear friends, never take revenge. Leave that to the righteous anger of God. For the Scriptures say, ‘I will take revenge; I will pay them back,’ says the Lord” (Romans 12:19). Was God granting Samson’s request for revenge? Or was He just paying back the Philistines for wronging Israel?

Some people believe suicide is the only unpardonable sin because it involves taking one’s own life; thus disrespecting the giver of life. Though there isn’t any biblical evidence to support this belief, based on the character of God, it’s safe to conclude that He is not pleased with suicide. But was Samson’s deadly act justified? Was it a selfless heroic act or plain suicide?

Then again, “Heroic” is a weighty word. Heroes make sacrifices that have nothing to do with their needs. Individuals who risk their lives on behalf of others are heroes. Men and women who died in battle for their country are heroes. Christ who died on the cross for our sins is a hero. So was Samson’s death a heroic act? He didn’t save anyone by pulling down the temple. In fact, he killed more people at his death than while he was alive (Judges 16: 30). So I asked…

Was Samson’s death truly a sacrifice or suicide?

Is any suicide ever justified?

Food for thought… what do you think?

Amelia Brown is from the beautiful island of Jamaica. She is a 28 year old Guidance Counselor by profession, but a passionate writer at heart. Most of her articles written are aimed at stimulating positive change under the guidance of the Holy Spirit. She is also a published poet and a member of Faithwriters. Outside of writing, she enjoys volunteering, cooking, and turning frowns right side up. Amelia currently lives in New York.
@ameliambrown
Previous When Life Gets a Little Nutty
Next Our Hope: God Was With Joseph