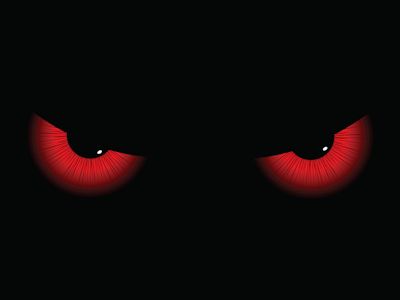 Satan was created as “Lucifer.” He was a beautiful angel who had been given much by the Lord. However, the multitude he was given wasn’t enough for him and his heart became corrupted.

Isa 14:12-15 How art thou fallen from heaven, O Lucifer, son of the morning! how art thou cut down to the ground, which didst weaken the nations! For thou hast said in thine heart, I will ascend into heaven, I will exalt my throne above the stars of God: I will sit also upon the mount of the congregation, in the sides of the north: I will ascend above the heights of the clouds; I will be like the most High. Yet thou shalt be brought down to hell, to the sides of the pit.

There was a War in Heaven

Since “Lucifer” tried to exalt himself, there was a war in heaven. I can imagine that the battle wasn’t even close, as Michael the Archangel and the holy angels fought against Satan, and the one-third of the angels that had followed him. Satan and his angels lost (Rev 12:4, Rev 12:7-8).

When Satan and his angels were defeated, they lost their place in heaven and were cast down to the earth (Rev 12:9). It is noted how severely Satan was cast down in the book of Luke:

Luke 10:18 And he said unto them, I beheld Satan as lightning fall from heaven.

Satan was striped of any authority he had and is now on a spiritual leash. He cannot touch anyone unless God allows it. However, just like in the story of Job, God uses Satan’s deeds against him and they end up working for the good of God’s kingdom (Romans 8:28).

Of course we all know about Satan’s temptation in the Garden of Eden where sin entered into the world, but the amazing thing about all this is the Protoevangelium, which means “the first gospel.”

Gen 3:15 And I will put enmity between thee and the woman, and between thy seed and her seed; it shall bruise thy head, and thou shalt bruise his heel.

This is where we see the first promise of the coming of Jesus Christ into our world so that he might destroy the works of Satan. What perfect timing! As soon as we messed up, God already had a plan in place to redeem us. How awesome is that?

We are the Head, Satan is the Tail

Something believers need to understand is that when they choose Christ, they become part of a royal bloodline and become princes and princesses of the Most High God.

Eph 2:6 God hath raised us up together, and made us sit together in heavenly places in Christ Jesus:

Since God has raised us up to the heavens and Satan has fallen, we are the head and he is the tail. This means we are above Satan in power, position, and authority.

Deut 28:13 And the LORD shall make thee the head, and not the tail; and thou shalt be above only, and thou shalt not be beneath; if that thou hearken unto the commandments of the LORD thy God, which I command thee this day, to observe and to do them.

Power to Tread on Darkness

Since we have power, position, and authority over Satan and his kingdom, we can tread over it. We can command mighty things in Jesus Christ’s name and put Satan in his place. Princes and princesses, don’t be afraid to exercise these rights. This is how we continually crush Satan and send him packing.

Luke 10:19 Behold, I give unto you power to tread on serpents and scorpions, and over all the power of the enemy: and nothing shall by any means hurt you.

Christians, if you are under attack don’t be afraid to turn the tables. Quote scripture, remind Satan of his end, and draw near to God. Victory belongs to the Lord and He shares that victory with us. Live free my friends. Thank you for reading and God bless.

What are some of the lies Satan is trying to convince you of?

Joel M. Bauer is a 45-year-old U.S. Army Veteran from Dunn, NC, which is just outside of Raleigh. After being honorably discharged from the U.S. Army, he attended school at Taylor University, a Christian liberal arts school, in Fort Wayne, IN, where he received his BS in social work and psychology. He has worked in such places as a homeless shelter, a community based treatment center for severe mental illnesses, a school for troubled students, and other social service agencies. His current endeavor is to build The Bottom Line website into a site that inspires both Christians and non-Christians alike, and brings glory to God.
Previous “Do You Believe” release date announced
Next Goth Culture Among Teens