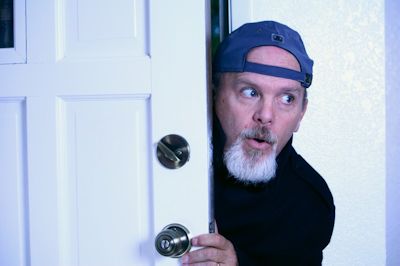 Sneaking Up On God?

Are you in a crisis? Stop! Don’t Panic! God has known about your situation before, well, before time even existed. People often panic about things that God already has under control. It’s just a matter of having faith in Him to bring us through the situation and in turn reacting appropriately with our actions. Let’s explore this further…

First, know that God loves you immensely. Psa 139:14 tells us that we are fearfully and wonderfully made. To me this verse just cries out divine craftmanship, and after designing each and every one of us with such care God is not going to simply allow His master creation to be tossed and turned with no way out of our struggles. He pays so close attention to us that Matt 10:30 tells us even our hairs are numbered.

Second, know that God has a plan for you. It’s impossible to sneak up on God with our problems. He simply knows already. We’re not going to surprise Him with our financial problems or maybe an issue with a bully at school. However, God will have you exercise your faith through actions. Let’s look at some examples in the Holy Bible.

Probably the first attempt at “sneakin” in the Bible was Lucifer’s attempt to exalt himself. He was surely confident of himself that he was on the winning side, but God knew about this before Lucifer knew he was going to do it. Keep in mind though, it became a problem for angels as well, so God didn’t simply fight the battle on His own, even though He could have. Rev 12:7 says Michael and his angels had to fight against the Dragon (Satan or Lucifer) and his angels. Of course the holy angels won and Satan and a third of the angels lost their place in heaven (Rev 12:4,8).

Now let’s look at this from a different angle. Remember Moses led his people out of Egypt following God’s instructions which ultimately leads them to a dead end at the shore of the Red Sea (Exo 14:2-3)? Well, this was also no surprise to God. We all know what happens next. God tells Moses to hold out the rod that was given to Him and the Red Sea is parted so that the Hebrew people may pass (Exo 14:15-16). God was ready to provide a solution before the problem ever existed. He’s willing to do the same for you.

There is a key mistake people make when dealing with problems. They get into a “prayer bubble” and try to pray away the problem. You can actually pray about a situation too much if it takes away from you properly reacting to the problem. For example, say you need to raise money for your church. Praying is a great idea, but over-praying isn’t going to meet the budget. It’s better to pray and then appropriately act on that prayer by coming up with something such as a church bake sale, car wash, or some event to raise the necessary funds. The problem is solved when prayer meets action, and that is part of what it means exercise faith and works together.

Friends, don’t be fooled! God loves us and wants us to be successful in our lives. This doesn’t mean things are going to always go our way, because sometimes we don’t react properly or don’t understand what’s best. When a problem does arise, keep in mind that prayer is extremely important, but it doesn’t need to be repetitive. We just need to cast our cares on the Lord and then make a decision if we need to do something constructive to act on what we were praying about. Also, remember not to panic because there are no surprises with God and He knows how to use the worst of circumstances for good. Thank you for reading and God bless.

Joel M. Bauer is a 45-year-old U.S. Army Veteran from Dunn, NC, which is just outside of Raleigh. After being honorably discharged from the U.S. Army, he attended school at Taylor University, a Christian liberal arts school, in Fort Wayne, IN, where he received his BS in social work and psychology. He has worked in such places as a homeless shelter, a community based treatment center for severe mental illnesses, a school for troubled students, and other social service agencies. His current endeavor is to build The Bottom Line website into a site that inspires both Christians and non-Christians alike, and brings glory to God.
Previous Extra-Curricular Activities: Keeping A Healthy Balance
Next Christian Refugees Singing In A Tent