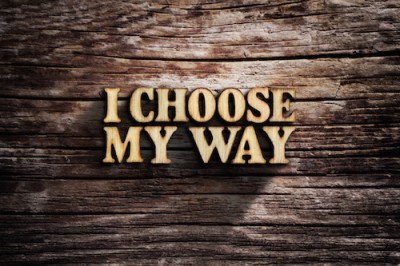 The Problem With “I Did It My Way”

I’ve been haunted recently by a fresh perspective of the Gospel. Don’t worry, that’s a perfectly fair use of the word which dictionary.com defines as: “preoccupied, as with an emotion, memory, or idea; obsessed.” So, I’m perfectly happy to have this Gospel ghost invading my thoughts, permeating the atmosphere of my mind.

That doesn’t mean that my mind is completely settled and at peace though. No, instead I’ve come to realize how poorly I’ve assimilated this Good News into my daily life. We’ve been told that the Gospel must get from our head into our hearts, but I think it’s more truthful that the Gospel must rule in both places—occupy both head and heart simultaneously to do us any real good. Otherwise, it may affect our destiny but it won’t change our day-to-day.

You see, since I said “yes” to Jesus at seven years old, I’ve been doing my best to live for him. But, while most of my life has been a valiant effort to please and honor God, it has also been a belligerent rejection of his unrealistic mercy, affection, love and provision. Ultimately, I’ve gotten stuck on the hamster wheel of “Oops, sorry God,” to, “I’ll do better; try harder,” to, “Thanks for giving me eternal life,” to, “See how pretty and shiny my life is now?” and back to, “Oops, sorry God. I’ll do better.” Then, it’s back to work on how best to manage my sin, get my behaviors (the external and obvious sins) under control so that I can go back to being a happy, successful Christian quietly humming, “I Did It My Way.”

So, God’s been relentlessly kind in pointing this out to me through various excellent books: Craving Grace, by Ruthie Delk; Waking Up, by Ted Dekker and of course, the Bible. Now, if you’re interested in joining me on this journey, you’d be wise to read both Delk and Dekker’s books cover to cover. I recommend doing that with the Bible too, but it’s helpful to start with a story that illustrates exactly what I’m talking about. So, let’s look at a lesser-known story—the story of Amaziah, king of Judah, in 2 Chronicles 25.

Young Amaziah, barely 30 years old, was a newbie to ruling a country. But the Bible says right off the bat that he did what was right in the eyes of the Lord. (If you know anything about the ancient kings of Judah and Israel, you know that’s not a common characteristic.)

But even though Amaziah (like those of us who call Christ Lord) was obedient to God mostly and desired to do what was right, he still had the human hankering to “do it my way.” Just before heading out to war, he gathered his troops and then decided he needed a few more. So he paid 100,000 men from Israel to join his army. God quickly dispatched a messenger:

“O king, do not let the army of Israel go with you, for the Lord is not with Israel, with all these Ephraimites. But go, act, be strong for the battle. Why should you suppose that God will cast you down before the enemy? For God has power to help or cast down.”

This was Amaziah’s first opportunity and he triumphed. He quickly released the Israelite soldiers and headed into battle confident God’s way was best. God delivered. Amaziah and his army conquered their enemies and took much spoil. But suddenly, Amaziah’s pride at his success took a turn for the worse.

“I Did It My Way,” must have been playing in his head too, as he took the idols of his conquered foe and set them up at home. Another messenger arrived saying, “Why have you sought the gods of a people who did not deliver their own people from your hand?” (Good question!)

But Amaziah replied angrily, “Have we made you a royal counselor? Stop!”

Let’s stop here. Can you see yourself? I see me as clearly as if a polished mirror lay between the pages of my Bible.

How often have I sought to obey and Lord, been successful—even acquired the admiration of other Christians—only to pat myself on the back (discreetly) and think, “I’ve got this good-God thing down!”

Don’t deny it. It happens to every. single. one. of us. The telling point is what we do next. God faithfully sends a reminder to each of us, in every situation (The Holy Spirit is called the counselor for a reason!) to pull us back from the devastating affects of our own way.

What next? Will you shout (with the memory of your most recent victory playing in your head) that, “I’m doing okay doing it my way!” Or, will you quickly see again the cross, the Good News, the Gospel—the resurrection—and realize that every single victory is from the Lord. Will you realize that if you adopt the idol of your most recent success you will quickly find yourself in the position of your defeated foe—guarded by something that cannot deliver or save?

In what area of your life do you insist on doing it your own way?