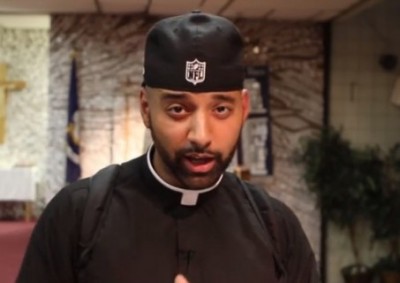 No, the title is not a joke. Neither is it a play on words. There really exist a Catholic priest who raps. Weird? I’ll leave you to be the judge of that.

Rev. Joshua Johnson, is an African American Catholic preacher… who also raps. At 27 years old, he’s the youngest priest in the Diocese of Baton Rouge, where he serves at Christ the King Catholic Church at Louisiana State University. Rev. Johnson has a master’s in theology from Notre Dame Seminary in New Orleans. He’s in his first year as a priest.

Becoming a priest was never Rev. Johnson’s dream. In fact, he said he didn’t like the Catholic Church when he was growing up. To him, it was boring. Added to that, he couldn’t understand their teachings. Like many of us, he has a past that he’s not particularly proud of; he calls it “Living in pretty serious sin.” His transformation happened through a divine intervention, during which he stated he was told to become a priest. Though he wasn’t immediately obedient, he eventually decided to follow his calling.

Rev. Johnson’s decision to become a priest did not quench his passion for rapping. Even though he raps for fun, it has been a part of his life for a very long time. As a result, he opted to include it in his ministry—that way he’ll get the best of both worlds. According to an article on huffingtonpost.com, Rev. Johnson’s rapping has brought him a measure of renown on YouTube and social media. He also hosts the hip-hop show “Tell the World” on Catholic radio. Though rapping isn’t a practical tool for priests, he’s decided to go against the odds and use his talent for witnessing.

Rap in and of itself is not evil; it’s not a sin. It’s part of the culture,” he said. “We can use that. We’re not called to reject the culture; we’re called to go into the culture and promote what’s good.

It’s easy to become judgmental when we’re experiencing things outside of our social norms or that are contrary to our culture. Yet, different isn’t always bad. “Judge not, that you be not judged. For with the judgment you pronounce you will be judged, and with the measure you use it will be measured to you.” (Matthew 7:1-2)

Do you think witnessing should be customized? What’s your definition of an effective Pastor/Priest?

Amelia Brown is from the beautiful island of Jamaica. She is a 28 year old Guidance Counselor by profession, but a passionate writer at heart. Most of her articles written are aimed at stimulating positive change under the guidance of the Holy Spirit. She is also a published poet and a member of Faithwriters. Outside of writing, she enjoys volunteering, cooking, and turning frowns right side up. Amelia currently lives in New York.
@ameliambrown
Previous Victory over Death
Next Is There Really Only One Way?