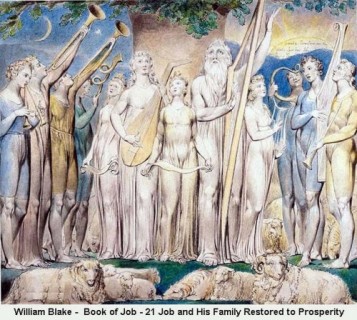 Was Job a Real Person?

The Book of Job, possibly the oldest book written within the Bible, is a profound and beautiful work with Godly advice that has reached into the hearts of millions of people for several thousand years. Many know the basics of the story, yet few have read it in its entirety.  Thus few understand the true meaning and revelations shown through the story of Job.  That meaning and moral is that all things work for the greater good according to God’s eternal plan, even suffering.  The other key theme in Job is that we do not have a right to think we are an intellectual equal to God; God does not “owe us” an explanation for when tough things befall us.  We, as Christians, are to humbly trust in God.

Another question surfaces in the study of this Book: Was Job a real person?  And regardless of the answer, does it really matter if he did not actually exist?  Does that lessen the validity and meaning of the Book?

Job was a well-to-do, and righteous, Patriarch who lived in the time between Noah and Moses (likely in the time close after the life of Abraham). Other than that, little is known of the era of his life.  He is said to have hailed from the “land of Uz”, which may or may not have been an actual name of a village or area back 4,000 or so years ago.  There is little archeological or non-Biblical evidence for such a place.

That said, whether Uz was a real place or not would not answer the question of whether Job actually lived.   There are many mysteries surrounding this.  We do not know who wrote the Book.  It is unlikely that Moses, the author of the first 5 books of the Bible, wrote about Job.  It is more likely that a contemporary writer or scribe- perhaps one that personally knew Job- wrote the grandiose story.

Outside of the Bible, the Qur’an, and early Hebrew tradition, there is no evidence for the existence of Job.

Some readers, including Christians, read Job and they cannot accept the first chapters of Job when God and Satan essentially are placing a wager about Job’s holiness. Via this wager, Satan causes and God allows the myriad of losses and pain that Job is well known for.  He suffers loss of wealth, house, belongings, business, and even his children.  He then physically suffers incredible pain from boils all over his body.  He cannot achieve any level of comfort; it pains him to sit or even lie down.  Lastly his wife gets hostile with him as their marital relationship becomes severely strained.

Would God allow all this, to prove a point to Satan? Would God allow innocent people (Job’s children) to suffer and die before their time, to perhaps instruct all of us down through eternity?  Maybe.

The truth is that it does not matter if Job lived on this earth, or if he was just a “story”- a parable. Jesus told numerous “stories” of potentially fictitious people as part of his ministry and teaching while he was here on earth.  The fact that the subjects of those parables were not “real” does not make the moral and direction any less relevant or holy.  If this method of teaching was conducted by Jesus himself in the New Testament, it can certainly be a part of the Old Testament.

Ken Lambert, D.Min, lives with his wife and twin boys in southern New Hampshire, and has written for a variety of religious and secular publications. He is co-author of Top Ten Most Influential Christians- since the Apostles, and is an adjunct instructor for Agape Seminary (Church History, Wisdom Books).
Previous I Don’t Think I Can
Next An Exquisite Necessity